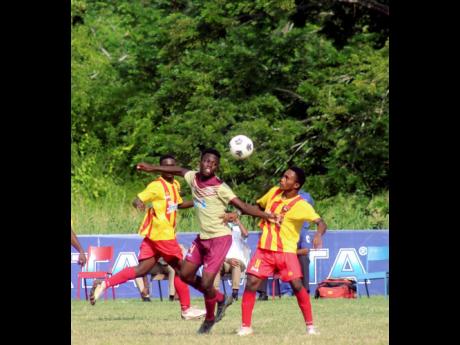 All four schools have a chance of advancing from the group’s final-round fixtures, which matches group leaders and defending champions Clarendon College, on 13 points, against second-placed Glenmuir High, on 12, at Foga Road High; and third-placed Lennon High School, with 11 points, going up against Edwin Allen High, who are fourth on 10 points, at Glenmuir High. Both games are set for a 3 p.m. kick-off.

In pole position on points and a plus-20 goal difference, the Lenworth Hyde-coached Clarendon College only need a draw to cement their spot in the next round as the likely group winners. Should the Chapelton-based team win, they will advance to an unreachable 16 points.

Glenmuir High and Lennon High have an identical plus-eight goal difference, while Edwin Allen’s is plus-11, so those teams will be wary of the permutations that could give them an advantage in this very tight race.

Nothing can be taken for granted, as these teams finished with margins that were close in the corresponding fixtures. Glenmuir High defeated Clarendon College 1-0, while Edwin Allen and Lennon played out a goalless draw.

Like Clarendon College, Glenmuir High would claim a spot in the second round with a win, as they would advance to an unassailable 15 points.

However, any victory, for that matter, would give either team an advantage, though Edwin Allen is least favoured because even if they win and Clarendon College lose, the goal difference is such that the latter may still end up at second position in the group.

Giving themselves the best chance

Both Lennon and Edwin Allen will enter their matchup on the back of a losing result on the weekend. Edwin Allen suffered a 3-5 loss to Clarendon College, while Lennon were beaten 0-1 by Glenmuir High.

Byjon Thomas, the coach of Lennon High, said they are focused on giving themselves the best chance at a second-round spot.

“The result over the weekend wasn’t what we wanted, so now it’s all to play for. We know it’s going to be another difficult game,” said Thomas. “However, we are focused on giving it our best and hope that the result is in our favour.

“Based on the standings, if we win we should be through. However, we are not focusing on the result, we just want to give ourselves the best chance, and that will require a good performance on the day. They (Edwin Allen) are a really good team. I don’t expect the game to be played like our first encounter because this will be a winner-take-all. I expect a better game tactically and [different] approach from the players,” he added.

Coach of Edwin Allen, Tafari Burton, said while it is not entirely in their hands, the aim is to win and give themselves a chance.

“We know how tough the challenge is, we have played the team before. We drew 0-0 last time, but we know that in order to have a chance we need three points,” said Burton.

“We have to change our approach tactically, which we have already done in training, so it’s just up to the execution,” added Burton, who wants the school to be remembered in football.

“In the late ‘80s to ‘90, we were a school known for football. Since the 2000s, football has been down and the school is known more for track and field. We have a good team, and there is still a chance to go through and remind people about us in football,” he added.