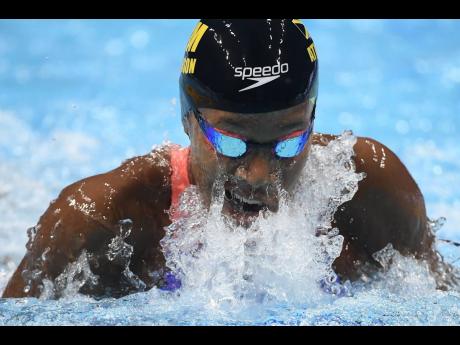 IN WHAT is expected to be her last competitive effort in the International Swimming League (ISL), Jamaica’s Alia Atkinson continues to peak brilliantly.

Atkinson snipped a recent season’s best down to 29.15 seconds in the 50-metre breaststroke and produced a strong relay performance for her London Roar team.

Swimming at the ISL final in Eindhoven, Holland, last weekend, Atkinson outsped a fine field to notch her second 50-metre breaststroke 2021 best in a row. After clocking 29.17 seconds in the play-offs last month, she jetted away from 2016 Olympic 100-metre breaststroke winner Lilly King, 29.44; Benedetta Pilato, 29.56; and Imogen Clark, 29.59.

Clark beat Atkinson during the play-off with a British record 29.32 seconds, but has now lost twice in a row to the soon-to-be 33-year-old Jamaican.

Described recently as an ‘energiser bunny’ by national swim coach Gillian Millwood, Atkinson made up ground with a one-minute, 04.33-second swim in the 4x100m medley, but the cause was lost. The Energy Standard team won in three minutes, 48.11 seconds, with the Roar 0.34 seconds behind.

The Energy Standard scored 534 points to win the final, with the Roar well back in third on 393.5 points.

Millwood feels that the 2012 and 2016 Olympic finalist will dip under 29 again before she retires.

“I want to be hopeful and say 28-low to cap off this career, because she’s going into Short Course Worlds after this, and then the world is her oyster after that,” the coach estimated after Atkinson’s time of 29.17 seconds in the ISL play-offs.

The World Short Course Championships are set for Abu Dhabi from December 16-21.

“At the end of each swim,” Millwood observed, “she’s like, you know, when you watch an athlete and they have a time in mind, and they’re searching for that time. Now when she touches the wall and turns around, it’s like her eyes are just open, ‘alright, let’s see how that did go’ and then it turns into, not a shock as, say, 2014, at the end of that 100 breast; but it’s ‘alright, that’s where I’m at with this one.’”

That 2014 swim was a world record - one minute, 02.36 seconds at the World Short Course Championships in Doha, Qatar.

“It’s a very cool and calculated and confident approach. She looks at peace now,” said the coach.

Atkinson has broken 29 seconds three times in her career and owns the world record of 28.56.