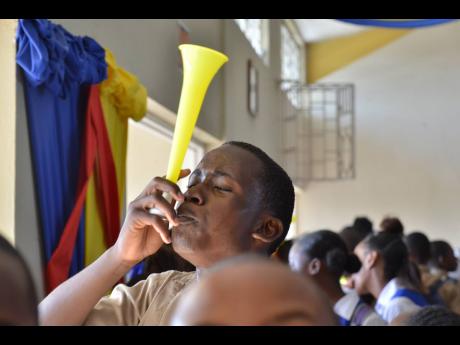 Kenyon Hemans
A Clarendon College student blows a vuvuzela during celebrations of winning the last edition of the ISSA daCosta Cup.

At the start of yesterday’s games four teams in the daCosta Cup’s Group E, Clarendon, Glenmuir, Lennon, and Edwin Allen high schools, were all in with a chance of securing the final two spots of the competition’s round of 16.

When the final whistle blew, the defending champions of the prestigious schoolboy football title had retained the top spot in Zone E, after a 1-0 win over Glenmuir High School at Foga Road. Clarendon’s win left Glenmuir in third place and out of the daCosta Cup, while Edwin Allen, after a 3-0 romp over Lennon High School, secured second place in the group.

The results put Clarendon in Group Four along with Cornwall College, Manchester and McGrath high schools.

According to Tafari Burton, coach of Edwin Allen, yesterday’s 3-0 win over Lennon and the resulting qualification was dedicated to the community of Frankfield.

“This one is for the community of Fankfield. The community longed to see this, trust me. I’m proud of the youths, they have worked hard,” Burton said.

Edwin Allen took command at the Glenmuir High field, taking a 2-0 lead at half-time courtesy of a brace from Richard Henry. They secured the three points and their primary objective of a spot in the quarter-finals when Jamari Howell netted a second-half penalty.

Burton applauded his boys for their execution of the game plan.

“We knew it wouldn’t have been an easy game. We really played well, especially in the first half and we knew they would try to come back in the game in the second half. I told my boys all we have to do is contain them. We got a penalty later on and just closed the door,” Burton said.

While Burton anticipates a tough quarter-final round, he is confident in the ability of his boys as they set their sight on a deep run in the competition and even silverware.

“The further we go, we have to expect a greater challenge. We are excited but at the same time we have to be humble in the way we approach the quarter-finals. We have a game Saturday against William Knibb, who won their group, so we know it won’t be a walkover. We will be ready for the challenge,” Burton said

“With the talent in this team, I am confident we will do well in the quarter-finals. We want to go beyond this (quarter-final) round. Even the Ben Francis Cup is something to compete for as well, but of course, we are looking further than just that,” he added.