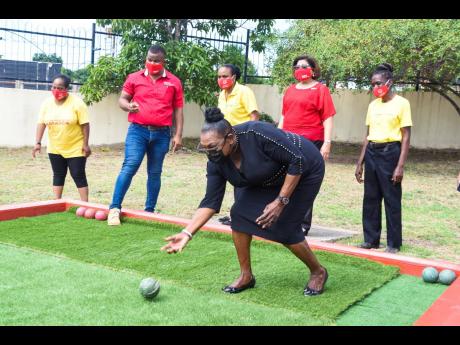 Nicholas Nunes/Photographer
Olivia Grange, Minister of Culture, Entertainment, Gender and Sport, partakes in a game of bocce with the Special Olympics Jamaica and members of the Digicel Foundation at the official reopening of the refusbished Special Olympics court at Independence Park, National Stadium complex.

SPECIAL OLYMPICS Jamaica Chairman Ali McNab said that the renovation of the Special Olympics court felt like a rebirth for the movement in Jamaica, given the challenges that the COVID-19 pandemic presented.

McNab was speaking after yesterday’s handover ceremony of the multipurpose sports facility at Independence Park, which saw the courts resurfaced and stands repainted. The Digicel Foundation, which funded the project in 2015, was involved in the renovation.

McNab says that given the inactivity caused by the pandemic, the renewed venue will provide the ideal motivation for special athletes to move forward with their preparations for next year’s events and beyond.

“It’s almost like a renewal. It is no secret to what COVID-19 has done to countries and sport is no different. Special Olympics has been hit very hard. We are looking forward to January where all areas of Special Olympics will be in training and will be moving towards tournaments next year,” McNab told The Gleaner. “That’s what athletes live for. They live for competition and our special athletes are no different.”

The facility, built specifically for special athletes, is suited for sports such as basketball, volleyball and bocce.

It is not just the ability to train together again after an extended period that is exciting to the athletes. For David Duncan, athlete leader for Special Olympics Jamaica, he said it was the chance to return to the community and belonging that was missing during that time.

“It’s more than just training. Special Olympics is a family and we missed the closeness. We still have to abide by the COVID-19 restrictions, but having that bond and that closeness coming back to something like normal again, it means the world to us,” Duncan said.

McNab said that the absence of togetherness has affected the athletes the most.

“Special athletes are not altogether different than normal athletes, but they are different in the sense that competition provides a sense of outlet for them. It is a way they express themselves. All the unfortunate things that have happened over the last two years made them dwell deeper into themselves,” said McNab.

“It is going to be a challenge for our coaches and everybody to pull them back out of their retreat to once again make them believe that you are accepted. You are representing Jamaica and you are much respected and expected to perform well when you are representing the nation,” he added.

Among the main events that the athletes will be preparing for will be the World Winter Games in Kazan, Russia, which was rescheduled to January 2023 because of the pandemic.

Sports Minister Olivia Grange said after the initial opening six years ago, the renovations were necessary and that they are committed to continue offering financial support for Special Olympics Jamaica, which contributed to $3.5 million last year through the Sports Development Foundation.

“We felt that it was now time to have it refurbished as we are moving hopefully out of a COVID-19 restricted period into what we hope will be maybe a new normal,” Grange said. “We will continue our subvention and we will continue to provide the coverage that they receive under the Athletes Insurance Plan. In a competition year when they have to compete internationally, we always increase the funding we provide to them.”