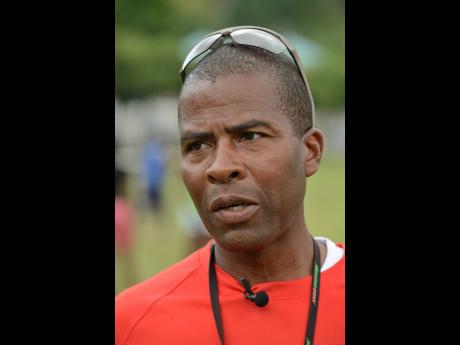 AFTER ADVANCING from the first round of the Inter-Secondary Schools Sports Association (ISSA)/daCosta Cup football competition for the first time since 2014, head coach of the Edwin Allen High School team, Tafari Burton, is hailing the girls’ track team as a motivating factor.

A past student and former player who represented his alma mater in the early 1990s, and who returned as coach of the team in 2019, Burton admitted that the female team’s performance last season, when there was uncertainty that the competition was going to take place, and pre-match speeches by head coach of the track team, Michael Dyke, and first-time principal Jermaine Harris is proving to be influential.

“Kudos to our new principal, along with Mr Dyke, for their encouragement, especially Mr Dyke, who is also the new head of physical education and who is also the physical trainer for our team, as he is always motivating the team during training and before their respective matches and despite a touch and go before the competition,” Burton explained. “He really helped with the guys remaining focused.”

Dyke, who is also an Edwin Allen past student, reaped praises on Burton and the team.

DONE WELL FOR THE TEAM

“This is good for the community, as people can now see us doing well in another area. And every time I speak to them, I tell them that they can emulate the girls’ performances. Burton has done wonders with the team and I am really happy for him, knowing that he is a past student, like me,” said Dyke.

The dreadlocked Burton thinks the team can go deep into the competition. They will play their first game of the second round against William Knibb on Saturday.

“We are coming out of a very tough group, where any two of four teams on the final day could have advanced, and we were gallant in defeat this season to the defending champions, Clarendon College, and I don’t think any one team in the past 10 years has scored so many goals on them like we did,” said an upbeat Burton.