Let’s get it on, Sweet Majesty to deliver Miracle Cure 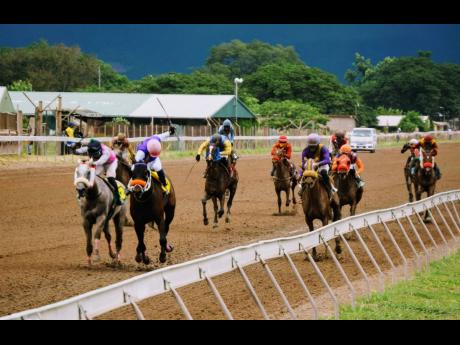 LET’S GET IT ON and SWEET MAJESTY have both performed creditably against decent colts and geldings in recent races to be given the nod in their respective sections of Saturday’s fillies-only Miracle Cure Sprint at the tricky trip of five and a half furlongs.

LET’S GET IT ON might have finished ninth in a 14-horse field topped by SUDDEN FLIGHT at five furlongs straight two Sundays ago but ran a far better race than her placing indicates in the form line.

First, she was handled like a horse with a race on the horizon, asked only to do the bare necessities from start to finish, yet hardly lost, by three lengths, inside the final furlong.

Though drifting to the stands’ side, LET’S GET IT ON was among five horses finishing almost parallel, two and three-quarter lengths separating fifth from ninth. BATON ROUGE, the 8-5 favourite, who was fifth, four lengths behind SUDDEN FLIGHT after breaking from the dreaded one hole, had finished a length and a half behind PRESS CONFERENCE in his previous race.

PRESS CONFERENCE returned up in class last Saturday, among non-winners-of-four, to chase BILLY WHIZZ to the furlong pole, eventually weakening into fifth at seven furlongs.

Returning in a fillies-only event, LET’S GET IT ON, who narrowly lost to CATABA on November 15 when attempting a second victory at five furlongs straight, emerges as a key horse especially after finishing third behind MAGICAL MOOD and MUM at five and a half on October 25. Running at odds of 41-1, LET’S GET IT ON was third-best after being slammed at the start by fourth-place GREAT BRITT.

Though Omar Walker has apparently chosen to partner ROCKET LILY, the six-time champ’s hopes of stealing a march will be spoiled by another short runner, LADY PUJARIE, who is also coming to make all, leaving Robert Halledeen to clean up the scraps of that battle with LET’S GET IT ON.

Meanwhile, division two might appear a tough race on paper for SWEET MAJESTY, who has not raced shorter than seven and a half furlongs in her last 10 starts. However, it should be noted that prior to being pointed to the classics, SWEET MAJESTY was second on debut to KING’S MAGICIAN at five furlongs round and third behind WILL AT WAR at six and a half in her next start.

Partnered by Anthony Thomas two Saturdays ago, SWEET MAJESTY tackled nine and a half furlongs but was outstayed by imported CLASSICAL ORB and company. She might appear to lack speed but has good mid-race pace, which she used to come off the turn second behind SHE’S A WONDER in the Oaks.

JAHSENDBLESSINGS is the speed horse who will try making all with the light weight. However, she is just rounding into form with two good efforts at five furlongs straight. The round course, though, could prove a challenge, especially with an extra half-furlong and a cavalry charge of fit runners coming off the turn.