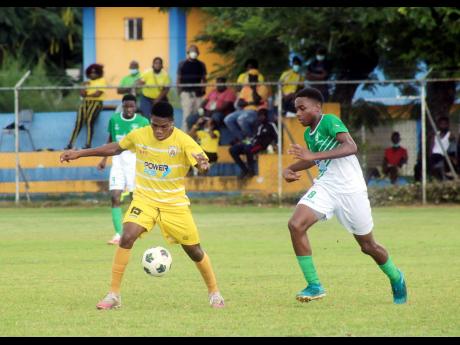 MUNRO COLLEGE and Vere Technical, with almost a hundred years combined without winning a title, will be looking to take a step closer to a chance at silverware this season when they face off in the Inter-Secondary Schools Sports Association (ISSA) daCosta Cup football competition quarter-finals at Kirkvine today at 3 p.m.

Munro College, who won seven daCosta Cup titles in 14 years since its inception in 1950, will be looking to end a 57-year drought by getting more than the single point they got from a 1-1 draw with Happy Grove High last Saturday.

The Malvern-based all-boys’ school has found itself in a spot of bother, as Saturday’s draw was their only positive result in their last three games. A few weeks ago, they registered wins over title contenders St Elizabeth Technical High School (STETHS) and reigning Ben Francis Cup champions B.B. Coke High.

Munro College’s coach, Patrick ‘Jackie’ Walters, who is aware of the hunger for silverware between both teams, is imploring his boys to be committed as he believes they have the capability to be successful this season.

“We have to pull out all the stops tomorrow, we have no choice. The players themselves have to understand how important this game is for us. We just have to go out there, give it our best shot and win the game. We are quite capable of going out there and performing well,” Walters said.

“Vere is traditionally a good team and we know they are going to be tough opponents, so we have to be very resilient. They are also hungry, so it goes without saying we have to be committed because it’s been over 50 years since Munro have not won a title. However, we are on a path to be successful eventually,” he added.

Coach of Vere Technical, Hugh ‘Gorilla’ Howell, believes they slipped up in their performance and gave away three points over the weekend. However, he remains adamant they will not make the same mistake twice.

“Our approach will be to bounce back hard, of course. We don’t have a choice, even the blind can see that so it’s all guns firing tomorrow (today) because we have to deliver,” said Howell.

“We gave away the game on Saturday, so we have to make amends in this game. We can’t afford to slip up again,” Howell added.

Munro College vs Vere Technical at Kirkvine at 3 p.m.

Dinthill vs William Knibb at Manchester High at 1 p.m.

Edwin Allen vs Christiana at Manchester High at 3 p.m.

Happy Grove vs Manning’s at Drax Hall at 3 p.m.