Bowlers come to the party 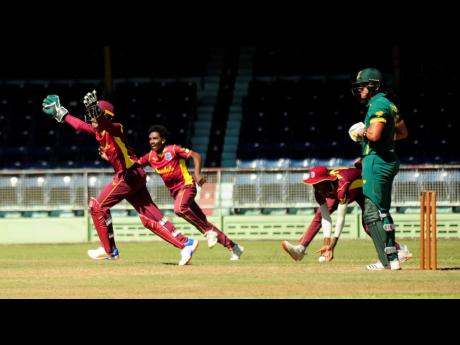 Courtesy of Cricket West Indies
From left: WI U19 wicket-keeper Carlon Bowen-Tuckett leads the appeal for the wicket of South African U19 batsman Hardsus Coetzer with teammate Anderson Mahase following closely behind.

THE WEST Indies Under-19 team put in a much-improved all-round performance which saw them defeating South Africa by eight wickets in their second Youth One-Day International (ODI) at the Arnos Vale in St Vincent on Tuesday.

Following their 18-run defeat in the series opener, the Windies youngsters bowled well after winning the toss to restrict the South Africans to 103 all out in 31.3 overs. The home side then cruised to 104 for two in 23.2 overs to level the four-match series at a game apiece.

Left-arm spinner Jaden Carmichael was the pick of the bowlers for the Windies, bagging three wickets for 25 runs from 8.3 overs. However, it was the speedsters Johann Layne and McKenny Clarke who were responsible for troubling South Africa’s top five batters with just 55 runs on the board in the 15th over.

Left-arm spinner Anderson Mahase also got into the act, as he picked up two wickets for 34 runs, as the South Africans never really recovered from the poor start.

Layne and Clarke finished with two for 14 and two for 12, respectively, against South Africa number six, Michael Copeland, who top-scored with 24.

In reply, the West Indies Rising Stars made light work of the target, despite losing opener Shaqkere Parris, who was bowled by Aphiwe Mnyanda for a duck in the second over.

Fellow opener Matthew Nandu and number three batsman Teddy Bishop then got the Windies to 62 in the 15th over, before Bishop went lbw to Ashake Tshaka for 25. Bishop had hit three fours in his 37-ball knock.

Captain Akeem Auguste then joined Nandu, and the pair saw the team over the line without a further loss following a 42-run third-wicket stand.

The win was certainly encouraging for West Indies under-19 coach Floyd Reifer and his staff who are keen to get every area of the team’s game right before the start of the ICC World Cup in early January.

“I must say congrats to the team. I thought the bowlers bowled very well and the fielding performance was a major improvement. That is something that we want to be consistent in doing by saving 10 to 15 runs every time we are in the field,” said Reifer.

The third Youth ODI will be played on Thursday, December 30 at the Cumberland Playing field in Charles Village in St Vincent.