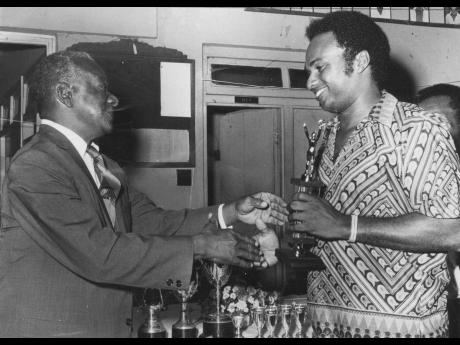 Gleaner photograph
In this 1972 file photo, Ruddy Williams (right), captain of Senior Cup cricket champions Melbourne, receiving a trophy for his outstanding leadership from George Headley at a presentation function held at the Chinese Athletic Club. 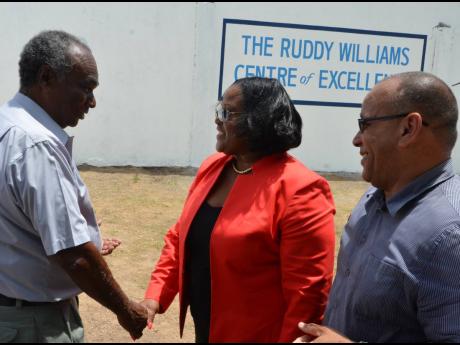 JIS
Minister with responsibility for Sports Natalie Neita Headley is greeted by former captain of the Melbourne Cricket Club (MCC), Ruddy Williams, during the opening of the Ruddy Williams Centre of Excellence at the MCC headquarters on Courtney Walsh Drive in Kingston on August 19, 2014. Looking on is President of the MCC, Mark Neita.
1
2

IF EVER a man could have been said to have dedicated his life to cricket, Ruddy Williams was that man.

The former Jamaica Cricket Association chairman of selectors and Melbourne Cricket Club (CC) stalwart passed away at the age of 80 on January 1, 2022.

Williams, who was affectionately called ‘Manage’, died after ailing for some time, and his death has left the cricketing community in mourning for a man hailed as a giant who contributed significantly to the growth and development of Melbourne CC and Jamaica’s national team.

Williams became a member of Melbourne CC back in the 1960s and held virtually every position on and off the field at the prestigious club.

Williams, according to club President Mark Neita, was the man who orchestrated the club’s move from its old home in Kingston to its current abode on Courtney Walsh Drive, formerly Derrymore Road.

For Neita, Williams was the consummate professional who oversaw the development of many cricketers, including himself.

“Ruddy gave selflessly of himself to Melbourne and was a mentor to so many. Almost every cricketer who played for the club between the late 1970s up to 2010, Ruddy played a significant role in their development, with many going on to play for Jamaica and the West Indies,” said Neita, also a former Jamaica cricketer.

One cricketer who virtually owes his career to Williams is former Melbourne captain and Jamaica and West Indies spinner Nikita Miller, who was brought to the club by the late administrator.

“Ruddy Williams was the ultimate man of cricket – player, captain, manager, chairman of selectors, but most of all, a great person. Ruddy went all over the country to watch cricket at all levels; this, I believe, contributed to his incredible success. I can safely say that I am a part of his success story, as my coach at STETHS [St Elizabeth Technical High School], Junior Bennett, told me at the end of my time at school in 2001 that Ruddy wanted me at Melbourne. Four years later I was a national player,” said Miller.

That success which Miller spoke of was Jamaica’s five back-to-back regional four-day titles from 2008 to 2012, which Williams oversaw.

Jamaica Cricket Association CEO Courtney Francis said Jamaica’s cricket has lost a “stalwart”, who deserved much more recognition for his contribution to club and regional cricket.