Ireland falter ahead of opening game vs Windies 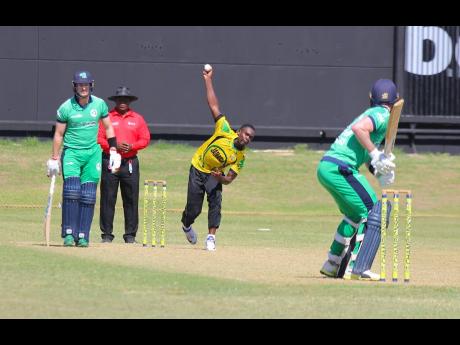 Lennox Aldred/Photographer
Jamaica Scorpions fast bowler Nicholson Gordon in full flight against Ireland in their 50-over warm-up match at Sabina Park. Gordon ended with figures of 5-34 as the Scorpions won by five wickets.

Led by an unbeaten half-century from captain Rovman Powell, the Jamaica Scorpions defeated a touring Ireland side by five wickets in a 50-over warm-up match at Sabina Park on Wednesday.

The hard-hitting right-hander Powell was in an aggressive mood and hit four fours and six sixes in his 63-ball knock of 82 not out as Jamaica eased to 235 for five after dismissing Ireland for 234.

It was not always an easy road for the hosts early on as opener Kirk McKenzie was bowled for naught with just 10 runs on the board.

Fellow opener Leroy Lugg hit two fours in getting to 16, but he became the second of three wickets for left-arm seamer Joshua Little to leave the Jamaicans on 23 for two.

Brandon King was then joined by Andre McCarthy, and the pair steadied the ship, taking the Jamaicans past the 100 mark with an 83-run third-wicket stand before the former was outfoxed by Andy McBrine and was caught and bowled for 36.

McCarthy had played his way to a fine 48 with seven fours and a six but fell to Craig Young to leave the side in a precarious position at 107 for four in the 21st over.

It was then the turn of skipper Powell to assert his dominance as he and Paul Palmer Jr took the home side into the ascendency following a 94-run fifth-wicket partnership.

Just after the team got over the 200 run mark, Palmer was bowled by a yorker from Little for 33, but wicket-keeper Kimani Wilson, five not out, and Powell saw the team over the line with more than 11 overs to spare.

Earlier, fast bowler Nicholson Gordon put in a fine shift with the ball to bag five wickets to help restrict the Ireland team.

Gordon, bowling from the Pavilion end, claimed four of the first five Irish wickets to leave the visitors in tatters at 69 for 5 in the 17th over.

It took a defiant knock of 82 from 107 balls from George Dockrell to rescue the Ireland innings.

Dockrell, who hit six fours and two sixes, got good support from the lower order, with Simi Singh getting 29 and Mark Adair 25.

Gordon, who took the final wicket of the innings, ended with five for 34 from 9.3 overs while Powell weighed in with three wickets for 32 runs.

Ireland go into the first of three One-Day International games against the West Indies at Sabina Park on Saturday.

Scores in the Match