Fights on the same card as twin brother 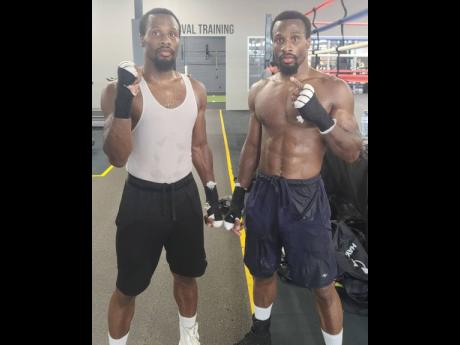 Another of Jamaica's amateur boxing champions, Canadian-based Trevor Thonson, is scheduled to move into the professional

ranks tonight when he makes his debut in Louisiana, New Orleans, USA, on a card labelled "Bash at the Mash" by Boswell

Another former champion, light middleweight Joshua Frazer, who is also based in Canada, turned pro last month. He won his fight by second round tko, and fights again next month.

Thonson, who was crowned amateur lightweight champion of Jamaica in January 2020, will be going against American Dominique

Of interest, is that his twin brother Chann, who turned pro in 2016 and has a 7-0 record, will also be fighting on the card. He goes against another American, Akeem Jackson over six rounds.

Speaking to The Gleaner, Trevor said he was excited to be moving into the professional ranks, and that to be fighting on the same card with his brother, who encouraged him to get into boxing, was special.

"One of our goals is to be world champions and we challenge each other," he said.

They both fight as lightweights.

Trevor, who is older than Chann, by seven minutes, said that one of his goals as an amateur was to win an Olympic medal, but the Covid-19 pandemic robbed him of his chance to do so, when the qualifying tournament in which he was scheduled to participate, was cancelled.

"I have put that behind me now, and just want to move ahead. I am planning to make an impressive debut and hope that there are no more setbacks," he continued.

Chann, who last fought in September 2021, after a near two-year break because of the Covid-prompted slowdown in the sport, said he was happy to get back in the ring, and wants to produce a memorable fight on the night his twin brother is making his debut.

"What I would like is for both of us to have impressive wins and set ourselves up to be a twin attraction. Being on the same card is really a thrill, and I would like that to continue. If we both do well, the promoters will want to keep us fighting on the same card, so that is another goal that we have. Our aim is to make an indelible mark in the sport, and we are prepared to do all that is necessary to accomplish this," he added.

Both boxers are trained by Chris Johnson, a Jamaican who lives in Canada, who did well as both an amateur and a professional. He won an Olympic bronze medal for Canada in 1992, and ended his professional career in 2001 with a 26-3-1 record. He spent some time in Jamaica a few years ago, with plans to work with both professional and amateur boxers, but these were curtailed by Covid, and he returned to Canada.