Pollard: We still have work to do 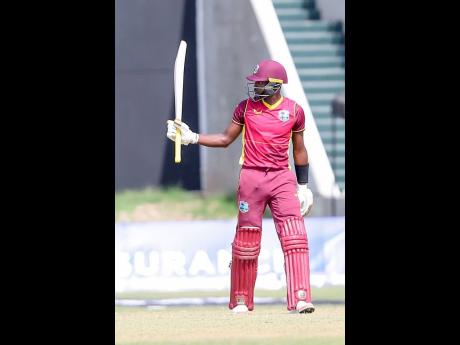 Lennox Aldred
West Indies batsman Shamarh Brooks celebrates after reaching his half century during the first One Day International against Ireland at Sabina Park last Saturday.

West Indies captain Kieron Pollard gave the thumbs up to his team for a workmanlike performance against Ireland, which saw the regional side coming away with a 24-run win in the first One Day International at Sabina Park on Saturday.

The Windies’ victory was set up thanks to a brilliant debut 93 from player of the match Shamarh Brooks and a dogged 69 from captain Pollard to see the West Indies post 269 all out in 48.5 overs on a difficult pitch early on for shot-making.

The pair put on a valuable 155 runs for the fifth wicket after the home side were precariously placed at 62 for four in the 19th over.

The West Indies then restricted the visitors to 245 all out in 49.1 overs, with the seam duo of Alzarri Joseph and Romario Shepherd bagging three for 55 and three for 50, respectively, despite 71 from visiting captain Andy Balbernie.

The win secured a one-nil lead in the three-match series for the Windies and also 10 valuable points for the regional side who now join Ireland on 50 points in the ICC Super League standings.

Winning captain Pollard was pleased that the team was able to get over the line in the end, but there is much more work to be done with regard to execution.

“It was challenging. The most important thing is getting the victory. When you look at it, the toss is going to play a big factor in the entire series. There’s a lot of moisture in the Sabina Park track, and our techniques will come into play. I don’t see anything different in the next couple of games. Ireland used the conditions pretty well, and we need to be aware of that, and we need to be tighter and find ways to rotate the strike,” said Pollard.

The Trinidadian said the partnership between him and Brooks was crucial but also praised his bowlers for defending the target.

“That 155-run partnership with myself and Brooks was needed. We left about 20-25 runs out there. We lost six wickets for 64 runs, and that’s something we need to look at. The bowlers did pretty well. The pitch dried out, and it was a better batting track in the second innings. The guys stuck in, and all the bowlers were fantastic,” added Pollard.

The two sides will meet again tomorrow in the second ODI at the same venue.