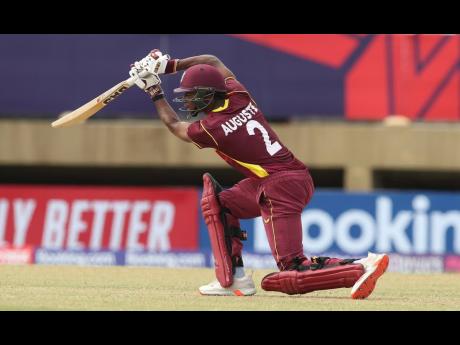 CWI Media photo
West Indies Under-19 captain Akeem Auguste on the go during the opening ICC Under-19 World Cup match against Australia Under-19 at the Guyana National Stadium yesterday. Auguste made 57.

The West Indies Under-19 team succumbed by six wickets to Australia in their opening Group D ICC Under-19 World Cup encounter at the National Stadium in Providence, Guyana yesterday.

The home side decided to take the first strike and could only manage 169, despite a half-century from captain Akeem Auguste. The Australians then eased to 170 for four, thanks to a resolute unbeaten 86 from opener Teague Wyllie.

Once again, it was the uncertainty of the regional side’s batting that proved their undoing against a well-organised Australian attack.

It started poorly for the hosts, as they lost their prolific opener Matthew Nandu for a duck in the opening over. Soon after, Teddy Bishop (five) and Shaqkere Parris (four) were also back in the pavilion with just 12 runs on the board in the sixth over.

It took a valiant 95-run fourth-wicket stand between captain Auguste and wicketkeeper Rivaldo Clarke to bring some respectability to the score.

But when Clarke fell for 37 in the 22nd over, things again took a turn for the worst, as Giovonte Depeiza (zero) and captain Auguste (57) fell shortly after to leave the home side reeling at 112 for six in the 25th over.

A resolute low-order knock of 29 from 35 balls by McKenny Clarke then helped to lift the Windies score, which eventually got to 169 in 40.1 overs. Three Australian bowlers picked up three wickets each, including the ambidextrous spinner Nivethan Radhakrishnan.

The West Indies knew that taking wickets would be their only chance of pulling off a victory, and they did get some early success when pacer Johann Layne bowled opener Corey Miller for a duck.

Fellow opening seamer Shiva Sankarthen removed Isaac Higgins for nine to leave the visitors on 21 for two in the eighth over. Things would look even better for the West Indies when the burly off-spinner Onaje Amory bowled captain Cooper Connolly for 23 at 74 for three, but that would be the only respite for some time, as Teague Wyllie and Radhakrishnan stuck in to take the Aussies closer to the target.

The pair added 75 runs for the fourth wicket, with Radhakrishnan making 31 before he was outfoxed by spinner Nandu.

Wyllie continued to bat patiently and eventually was left not out on 86 from 129 balls, with eight fours, to see the Aussies over the line and two valuable points.

*A. Auguste c Kellaway b Connolly 57

A. Mahase b Radhakrishnan 6