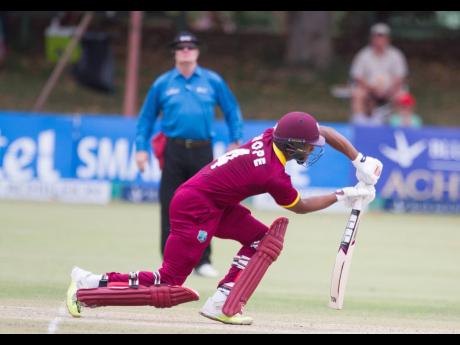 WEST INDIES vice-captain Shai Hope says the team needs to find the right formula to cope with the double challenge of an unfavourable wicket and a penetrating Irish bowling attack in Sunday’s decider in the One-Day International (ODI) series against Ireland at Sabina Park.

West Indies won the first game of the three-match series by 24 runs but lost the second by five wickets, having been sent into bat in both games.

Hope, speaking at a press conference yesterday, defended the batsmen’s performances, saying they were forced to play on a pitch that was not conducive to stroke play.

“We all know that in the morning time there is a lot of moisture in the pitch…. It’s not easy for batsmen to flow on those types of surfaces,” he said.

“…. I’m not saying that cricket has to be easy all the time, but it’s not a free-flowing wicket, especially in the morning at Sabina, so it’s just important for us as batters to adapt to that as fast as we can.”

The wicketkeeper-batsman said the conditions, coupled with the bowling from a team that he acknowledges is “not a walkover”, required the West Indies to find the right plan to come out on top.

“Whether or not we win the toss, we have to do whatever we do, first, to the best of our ability, and the key is to make sure we do it even better next game because we know it’s a series decider and we have to get those 10 points,” he said.

“…. Whether it’s putting the bowlers under more pressure, whether it’s trying to run more singles in the middle period when we get out there and I think it’s important for us to maintain more wickets, especially in the middle so we can launch at the back end. In the end of the innings, the wickets start to get a lot better so we probably just need to keep more wickets in hand and launch at the back end.”

Hope did give kudos to some of the newcomers in the team – Romario Shepherd who hit his maiden ODI half-century in the second match, Shamarh Brooks, and Odean Smith – saying they were delivering and he hoped to see them “continue in this stead and move from strength to strength”.

The vice-captain declined to disclose whether there would be a change in the batting order for Sunday’s match, saying it was very important for every batsman to be prepared for whatever may be required of them.

Asked specifically about whether consideration had been given to either moving Roston Chase or Brooks up the order to number three and Nicholas Pooran down at least one spot, he added:

“Again, that’s something that I can’t necessarily disclose but obviously it’s an option. I think that as batters we all have to have an open mind and make sure that we’re always in a position to deliver whatever the team requires.

“In a cricket game, especially in a limited-overs game, you will need certain personnel to play a certain role for you in different situations, so I think it’s important for everyone to have a clear and open mind so that if the opportunity arises that someone has to shift up the order or take a few steps down, then they’re ready to do the task,” he added.

Although Sunday is a series decider, Hope said both the players and management had been approaching all the games seriously, with 10 points up for grabs in each match to go towards the World Cup.

“We have to play every single game hard because if you want to win, there’s no trying and trying to see what’s gonna work. You have to make sure you have the formula for each game so that when we go out there, the aim is to win every single game to get those points,” he insisted.

On a personal note, the Barbadian said he was embracing the challenge of managing the roles of vice-captain, wicketkeeper and batsman.

“I still think the same things apply ‘cause I always share my input when it comes to seeing things or noticing anything on our field or even off the field. So it’s just important that I continue to do what I’m doing and not let too many outside interferences come into what we know as a team as well. It’s important for me to continue learning on the job and making sure I can do my best for the team,” he said.