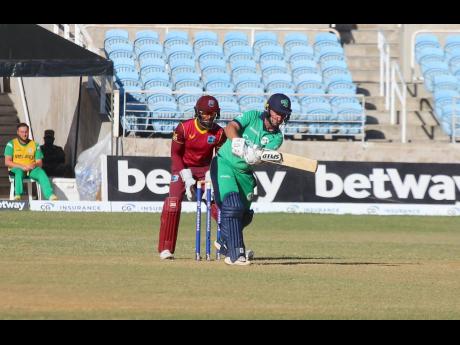 Lennox Aldred
Player of the match and the series, Ireland’s Andy McBrine, on the go during his top score of 59 in the third One-Day International against the West Indies at Sabina Park yesterday.

The West Indies’ batting woes continued at Sabina Park yesterday as the regional side succumbed to Ireland by two wickets in the third and final One-Day International at Sabina Park.

The win enabled Ireland to come from behind and claim a 2-1 series victory and 20 valuable ICC World Cup Super League points.

The home side, who failed to win a toss in the series, was once again asked to take first use of the Sabina Park pitch, and despite a decent start, folded for a mere 212 runs in 44.4 overs.

Ireland were in control for most of the run chase and rode their luck to the end, inching home to 214 for eight in 44.5 overs.

Once again, the fickle Windies batting was put to the test by the disciplined Irish bowling despite the surface being better for batting.

For the first time in the series, the home side got the start they wanted, with openers Shai Hope and Justin Greaves putting on a half-century stand with some counter-attacking batting, particularly from Hope.

The right-hander quickly raced to 53 off 39 balls with nine fours and a six. However, the fall of his wicket with the score on 72, triggered a mini-collapse for the hosts, who went from 72 for one in the 11th over to 85 for four in the 16th over.

That early damage was set up by seamer Craig Young and player of the match and series Andy McBrine, who picked off the Windies batters like sitting ducks as the innings unfolded.

Once again, it took a low-order rear guard batting to give the West Indies score some respectability as Jason Holder contributed 44 from 60 balls, Akeal Hosein made 23, and Odean Smith scored an unbeaten 20.

McBrine finished with four wickets for 28 runs, with Young picking up three for 43.

In reply, Ireland got good contributions from opener and captain Paul Stirling who made 44, while McBrine and Harry Tector both played match-winning innings, scoring 59 and 52, respectively.

It wasn’t all smooth sailing for the visitors, however. They lost a flurry of wickets towards the back end, but calm nerves from Craig Young (five not out) and Mark Adair (one not out) saw the Irish over the line with 31 balls remaining.

Spinners Roston Chase and Hosein bagged three wickets each, but their effort came a little too late as the regional side now ponder their next move, with the England series right around the corner. SCOREBOARD

A. Joseph c Stirling b Young ↔6

Did not bat: J Little