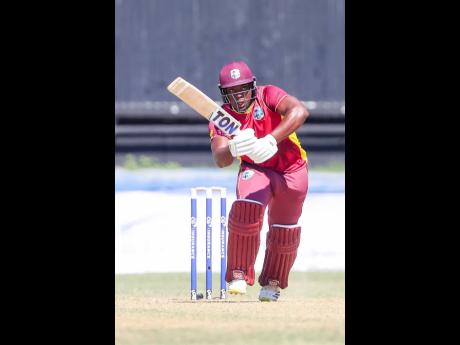 Rookie West Indies all-rounder Odean Smith will have some big shoes to fill for the West Indies T20 side when they take on England in the first of five matches in Barbados this weekend.

With the hard-hitting all-rounder Andre Russell absent from the West Indies squad, Smith is expected to play a similar-type role to the one that Russell has played for many years for the regional side, which is contributing with the bat and picking up wickets with the ball.

While Smith says he wants to put his stamp on the team and international cricket, the burly right-hander knows he will have his work cut out for him with tough assignments ahead.

“Andre Russell’s shoes are hard to fit in, but I am working on my game and, hopefully in the future, my reputation will be built up to a standard of his,” says Smith.

The former West Indies Under-19 player who won the ICC Youth World Cup in 2016, has had a meteoric rise to international cricket since putting in an outstanding performance in the Caribbean Premier League in 2021 with the Guyana Amazon Warriors, where he was the joint highest wicket-taker with 18 scalps.

“I would say my introduction into the West Indies team has been below average, to be honest. Individually, I have done reasonably well with the bat, but I am a bowling all-rounder and I haven’t done as much as I should with the ball, and I think I need to get in some more performances,” added Smith.

The 25-year-old has just three ODIs and five T20s under his belt. However, he wants to shy away from all the hype and focus on becoming better at his craft.

“I still have a long way to go and a lot of work to do, but it’s all a learning process because cricket is a learning process. I just have to work on my game along the way and I think I will get to where I want to be when the time comes.”