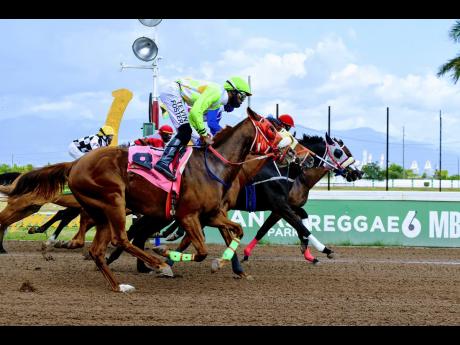 TRAINERS AT Caymanas Park yesterday morning aborted their threat of withholding nominations for this weekend’s Saturday-Sunday meet, accepting promoting company Supreme Ventures Racing and Entertainment Limited’s (SVREL) counter-offer of a “one-time incentive” on purses, valued at $18m, with an expiry date of June 30, 2022.

Horsemen, on whose behalf, Ian Parsard, a trainer and private-sector executive, was lead negotiator for a $70-million purse increase, had last week rejected a $9-million improvement on appearance fees put forward by SVREL. They agreed not to desert last Saturday’s nine-race meet but were adamant they would not have nominated horses yesterday for this weekend.

SVREL’s one-time incentive, under the signature of General Manager Lorna Gooden, entails a $50,000 addition to the purse of each race with the exception of futurities for three-year-olds such as the Triple Crown series – 1000 and 2000 Guineas, Jamaica St Leger and Jamaica Derby – as well as races designated Road to the Triple Crown events.

The promoting company, which took over operations at Caymanas Park from bankrupt government-run Caymanas Track Limited in March 2017, in a news release stated that its $18m proposal to the horsemen also reminded of the need for “implementation of a committee, consisting of representatives from SVREL and all relevant stakeholders, to craft and agree a formula linking purses to movements in revenues and costs, as per an MOU signed May 11, 2020”.

Though Ryan Darby welcomed SVREL’s revised offer, Patrick Smellie, who has claimed presidency of the United Racehorse Trainers Association of Jamaica (URTAJ) after a recent election, which his nemesis dismissed as a “mock election”, said there could have been “more fulsome negotiations” had horsemen not threatened a lockdown.

“If the threat to lock down racing wasn’t there, we could’ve had more fulsome negotiations but, because of the threat, we now have to accept something. It wasn’t in the interest of anyone for racing to be locked down in these times,” Smellie pointed out.

Meanwhile, Darby specifically addressed SVREL’s proposal of linking purses to “movements in revenues and costs” after June 30, hinting that sales from overseas racing must be a part of the negotiations, claiming, “It’s the same punters, who come to local races are the ones buying overseas racing.”

“We have a racing plant that sells overseas racing and local racing. We want to get as clear as possible what is it that we are to benefit from, which should be local sales and overseas sales. We would want to tie simulcast sales (overseas racing) as part of the negotiation.

“Just like how in the States you have casinos at the track that help to contribute to horsemen, I am saying if SVREL is in charge of racing, simulcast must be included as well if it helps the company to be profitable.

“We, the stakeholders are willing to take a chance of tying sales with profitability. We are willing to say if and when the company becomes profitable, we will ride with them,” Darby added.

However, if Smellie has his way, he will be the person sitting at the table, among other group heads, with SVREL, representing URTAJ in the coming months, insisting that Darby and his executive was legally booted at an election called by general secretary Bernard Vincent and held January 18.

“The election was held January 18 at which members turned up and two representatives from the Jamaica Racing Commission were there as observers. We had an invigilator, Paul Levy, who conducted the elections which went well,” said Smellie

“The new executive members were also elected, Patrick Lynch, Michael Beecham, Vincent Atkinson and David Powell,” Smellie pointed out, adding, “We will see what happens after the JRC ratifies the election.”