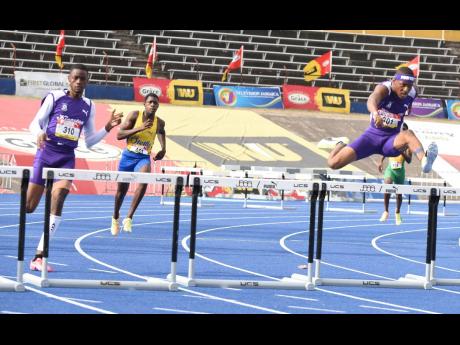 Antonio Forbes, Daniella Spencer and Asharria Ulett shone brightly last Saturday at a JAAA Development meet held at Calabar High School. Forbes, who won the Class Two 400 metres hurdles at last year’s ISSA/GraceKennedy Boys and Girls’ Championships for Kingston College, had a confident run in his first year in Class One while Spencer did a Class One sprint/hurdles double and Ulett impressed with a polished performance in Class Two.

Forbes paced himself through the backstretch wind to win in 53.50 seconds at the end of the morning session. He was happy to win but the time wasn’t quite what he wanted. “Started training with some difficulties and had some injuries, but today I just came out to open with a good time”, said the 2021 Class Two gold medal winner. Pressed further, he replied: “Kind of disappointed but I’m all right with the time.”

Brandon Harris of St Jago High cruised away with the Class Two 400 hurdles in 54.20.

Spencer warmed up with a 12.43 seconds trip to lead all competitors in the Class One girls 100m and, when she returned for the 100 hurdles, she glided home in 14.27 seconds. In the next timed section, Essence Burbridge, the winner at the recent JC Invitational, was charging to a fast time when she clipped a hurdle late in the race. She still managed to finish and clocked 15.44 seconds.

Ulett set the fastest time - 13.56 seconds - in the Class Two girls’ 100 metres hurdles. Her neat display drew high praise from Marlon James, her coach at St Catherine High School. “She’s not fast like her competitors,so she has to do a lot of work on her technique and she has to put in a lot of work, additional work even when I’m not there. And I think that, I don’t even want to say it, but I think that she can go sub-13,” he projected.

The Boys and Girls’ Championships Class Two record in the event is 12.91 seconds by Ackera Nugent in 2019 before she left Excelsior High School for Baylor University.

The fastest 100 metre sprints of the day came from Deandre Daley of Herbert Morrison High School and Abigail Wolfe of Holy Childhood.

Daley stepped through his section of the Class One boys’ 100 metres in 10.71 seconds and didn’t look flat out. Wolfe fought through a 2.9 metres per second headwind in 12.34 seconds to triumph in Class Two.