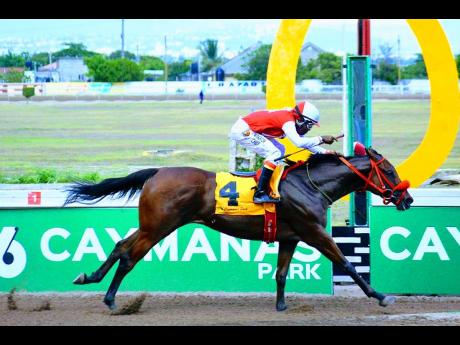 LAST year’s Guineas-placed filly, SECRET IDENTITY, should again use her pace to run rivals into the ground in Sunday’s George HoSang Trophy at five and a half furlongs.

Since reverting to sprints at the back end of last season, SECRET IDENTITY has only lost once to local-breds - a November 27 below par effort at five furlongs straight - finishing third as the 1-5 favourite behind SUPER DUPER and HOIST THE MAST.

In her follow-up race, December 11, SECRET IDENTITY not only proved that she had an off-day two weeks earlier, her victim at five and a half furlongs was none other than JORDON REIGN’S, a speedy United States-bred gelding, who was on a hat-trick of wins, after slamming by three lengths at the same trip on November 13.

Partnered by claiming jockey Matthew Bennett, SECRET IDENTITY was in receipt of 14lb from the foreigner, but had lost his whip from a furlong and a half out, prevailing by a neck from the foreigner, who returned January 15 to slaughter local non-winners of four races in 58.4.

Bennett is back aboard the filly, his seven-pound claim taking her weight down to what should be an unbeatable 112lb for a gate-to-wire victory.

PEKING CRUZ, who rolled back the years to land a $1-million claiming event at age seven on New Year’s Day, will try matching strides with SECRET IDENTITY but is a far cry in over his head among non-restricted overnight-allowance company, actually two groups higher than the level at which he won.

The United States-bred pair of ONE DON and GO DEH GIRL are versatile but will be giving up too much weight to SECRET IDENTITY, 14 and 11lb, reporting at 126 and 123lb, respectively.

ONE DON took his own sweet time to get past FEARLESS CHAMPION when winning at six furlongs last time out, and was outsped by GO DEH GIRL at five furlongs round in his previous race.

GO DEH GIRL should be the exacta horse if she doesn’t get into a speed duel with lightweight SECRET IDENTITY. She is quicker and lighter than the closer ONE DON but not as swift as SECRET IDENTITY, who has the weight and trip to her advantage.