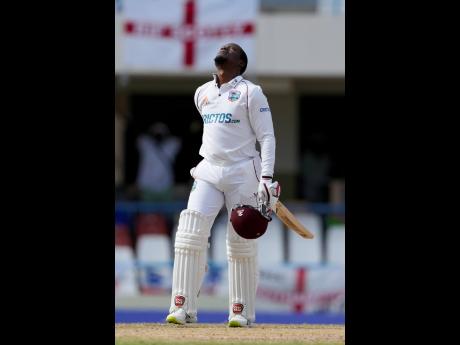 Jamaican batsman Nkrumah Bonner scored his second Test century to help the West Indies overtake England on the third day of the first Test in Antigua and Barbuda yesterday.

Bonner scored 123 in a score of 373 for nine to hand the hosts a lead of 62 runs after England had made 311. The right-hander’s patient knock saw him face 355 balls while spending nine hours and 18 minutes at the crease. He hit 12 fours and a six.

The West Indies had resumed yesterday on 202 for four with Bonner on 34 and Jason Holder, 43. However, the latter only added two runs to his overnight score before he was snapped up by Ben Stokes.

Then it was time for Bonner to set up shop, and he did so with a couple of lengthy partnerships, which knocked the stuffing out of the tired-looking England attack.

After getting to his 50 off 147 balls, Bonner and wicket-keeper Joshua Da Silva added 73 runs for the sixth wicket. Bonner then put on 44 with Kemar Roach and then 46 runs with Veerasammy Permaul.

It was a slow, gruelling, grind as the home side scored less than two runs per over in the entire day’s play, but the patience proved critical as the home side look to build on their lead on what is now an even slower, placid batting surface.

With England losing pacer Mark Wood in the entire afternoon session, it took left-arm spinner Mark Leach to get the England breakthrough as he trapped Da Silva in front for 32, at 279 for six.

Alzarri Joseph didn’t last long as he went to Craig Overton for two, but Roach came in and provided good support for Bonner, with the pair taking the West Indies past England’s first-innings score just before tea.

On the resumption, Bonner would eventually get to his century, which came off 257 balls and included nine fours and a six.

Roach would go on to get 15 from a whopping 89 balls before he was run out with the score on 326 for eight.

Permaul came in and also looked intent on sticking around, and he and Bonner continued to frustrate the visitors.

It took the part-time spin of Dan Lawrence late in the day to finally get rid of Bonner, who edged a catch down the leg side to wicketkeeper Ben Foakes.