Lyston produces performance of the day, fails to show for final 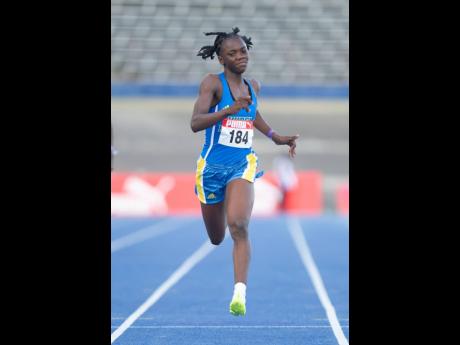 DEFENDING CHAMPIONS Edwin Allen and St Jago high schools were on track to retain their female and male titles, respectively, after day one of the Central Athletic Championships at G.C. Foster College yesterday.

The performance of the day came from Hydel’s Brianna Lyston in the preliminary round of the girls’ Class One 100 metres.

Lyston, who has been burning up the track all season in the sprints, including a massive personal best 22.66 seconds to win the under-20 200 metres at the Carifta Trials on Sunday, was in a no-nonsense mood in the short sprint yesterday.

The Hydel athlete blasted to a magnificent personal best of 11.14 seconds to turn back Carifta Trials under-20 champion, Tia Clayton, who was second in 11.31 seconds and in the process broke the old record of 11.60 seconds set by St Jago’s Kayla Bonnick in 2020.

The expected clash among Lyston and the twin sisters, Tia and Tina Clayton, did not materialise, however, as Lyston failed to show for the finals.

Tina, who had won her heat in a wind-aided 11.51 seconds, won the finals in another wind-aided 11.26. In so doing, Tina turned the tables on her sister from the Carifta Trials, as Tia was second in 11.37, while Janela Spencer of Manchester High was third in 11.7.

There were also impressive wins in the Class Two and Three 100 metres by Hydel’s Alana Reid and Edwin Allen’s Theiamalee Terrelonge, respectively. Reid won Class Two in 11.37 seconds while Terrelonge won the Class Three event in 11.88.

Among the boys, St Jago had two records in the 100 metres.

St Jago’s Gregory Prince was also in record-breaking form, lowering the Class One 400m record of 46.46 seconds to 46.31 with Carifta Trials under-20 winner, Edwin Allen’s Delano Kennedy, relegated to second in 47.02.