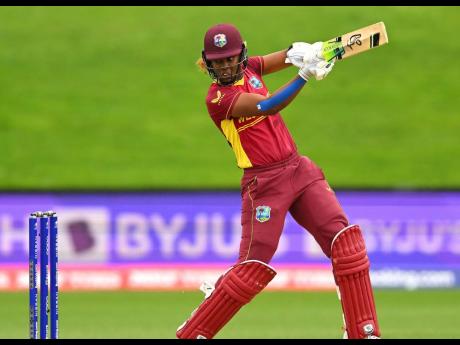 WEST INDIES all-rounder Hayley Matthews says the team is not under any pressure to qualify for the semi-finals of the ICC Women’s World Cup despite losing their second straight match at the global showpiece.

After securing victories over hosts New Zealand and defending champions, England, the West Indies went down to India and then Australia on Monday to be in fifth position on four points from four matches.

Against Australia, the West Indies were bundled out for 131, as Ellyse Perry and Ashleigh Gardner took three wickets each, with captain Stafanie Taylor’s 50 the bright spot of the innings for the West Indies.

Two early wickets brought the Windies back into the game before a masterful 83 not out from Rachael Haynes steered the undefeated Australia home for their fourth win from four matches.

With four teams set to qualify for the semis, Matthews believes the regional side has got the harder fixtures out of the way, and it is just a matter of going out there and winning their remaining matches.

“I don’t think there is too much pressure. Coming into this tournament, we knew our first four games were probably going to be our four hardest. I think we kind of said to ourselves, if we could get at least two or three wins over these first four games, we will be in a really strong position and we’ve done exactly that,” said Matthews.

The West Indies have Bangladesh, Pakistan and South Africa to play, and Matthews is keen that the team will continue to play positive cricket that will see them reaping more success.

“I think looking at the rest of the games. These are games that we should expect to win. And what’s the good thing about it is, that our fate is still in our hands, if we go there and we can win all three of our games, we will be qualifying for the semi-finals.”