Matthews looking to inspire from the field

Windies Women look to get back to winning ways against Bangladesh 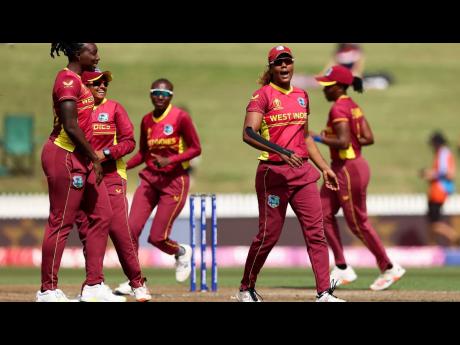 Courtesy of ICC
Hayley Matthews (second right) of the West Indies celebrates after taking the wicket of Deepti Sharma of India during a 2022 ICC Women’s Cricket World Cup match at Seddon Park on March 12, 2022 in Hamilton, New Zealand.

WEST INDIES all-rounder Hayley Matthews has no doubt been one of the standout players for the regional side so far at the ICC Women’s World Cup.

The right-handed Matthews has so far scored the third-most runs in the tournament with 207, coupled with six wickets under her belt, which sees her lying eighth in the most wickets column.

But the statistic that has stood out glaringly for the Barbadian is the six catches that she has taken in the four matches to date.

Those six catches lead all teams, with Matthews taking a few blinders at slip, including two in the recent match against Australia to go with a caught and bowled in the same encounter.

For Matthews, the runs and wickets have given her confidence in the field, and it is a testament to the hard work that the team has been putting in over the last 12 months.

“I’m kind of just getting back into things with the slip catching. I think over the last three years the team went through a bit of a shaky period where we probably put down a lot of catches at slip, if you really looked at the record. So, we’ve tried right before this World Cup just to do a lot of work, getting ourselves in a good position and getting a better understanding of what it takes to be a good slip catcher,” said Matthews.

Matthews added that the team had to shrug off a poor start to the tournament in the field, and she felt that she needed to lead from the front to get everyone on the same page.

Matthews and the West Indies will be in action once again today when they play Bangladesh in Mount Maunganui starting at 5 p.m. Jamaica time, and the right-hander is well aware that the team will have to play well to bounce back from back-to-back defeats.

“Every team we play, we’re looking to go down playing our best game. Bangladesh are probably going to be on a high after their last win but, when we go there, we’d like to play as hard as we would play any other team and just looking to try to execute our plans as best as possible.”