Windies made to toil, Root century highlights day one 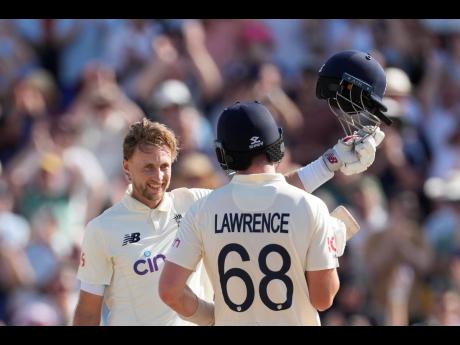 AP photo
England’s captain Joe Root celebrates scoring a century against West Indies on day one of their second cricket Test match at the Kensington Oval in Bridgetown, Barbados, yesterday.

THE WEST Indies bowlers may have put in one of the hardest first-day Test shifts in a long time.

Sent to field on the first day of the second Test in the Apex Series at the Kensington Oval in Barbados, the West Indies were made to toil for the three England wickets they bagged while the visitors amassed 244 runs.

England captain Joe Root continued where he left off from the opening Antigua Test, scoring his second consecutive century to lead the batting charge.

Root will resume today’s second day on 119 as the visitors took advantage of what could only be described as a ‘belter’ of a flat batting track at the Oval.

It wasn’t all doom and gloom for the West Indies early on as Jayden Seales found the edge of opener Zack Crawley for a duck with just four runs on the board.

Root joined opener Alex Lees and they made it clear they were in no rush to get runs as England went to lunch with just 47 runs on the board in 30 overs.

The pair would step up the tempo just a bit in the post-lunch session and took the score to 80 before Lees was trapped in front by spinner Veerasammy Permaul for 30.

That would be the only respite the home side would get for some time as Root rode his luck on two occasions to first bring up his 50 off 121 balls. Then he would get to three figures after tea off 199 balls with 11 fours.

Root’s 25th Test century may not have been had skipper Kraigg Brathwaite reviewed an inside edge when Root was on 23 and then wicket-keeper Joshua Da Silva put down the captain down the leg side off Kemar Roach when on 34.

Root and Dan Lawrence added 164 runs for the third wicket, and just when Lawrence was looking to bat out the day, he drove the penultimate ball of the final session from Holder to Brathwaite at cover for a well-played 91 from 150 balls with 13 fours and a six.

Despite the slow day for the home side, assistant coach Roddy Estwick is optimistic heading into today’s second day.

“It is a very good batting pitch with not a lot of pace or sideways movement. It is not a typical Barbadian pitch, but we have to work with what we got. We have to come tomorrow (today) and make that second new ball work for us.”