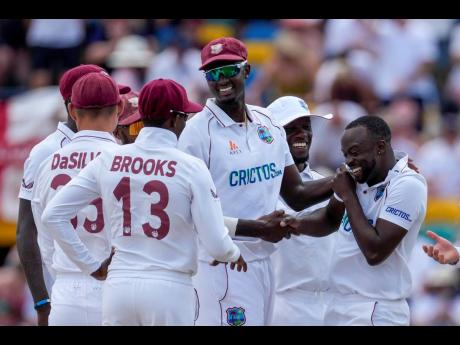 West Indies fast bowler Kemar Roach could not hold back his elation when the decision review system indicated that England captain Joe Root was hit in front and was adjudged leg before wicket for 153 out of a massive England total of 507 for nine declared on the second day of the second Test in Barbados.

That big scalp not only broke a huge 129-run partnership between Root and Ben Stokes, but it took Roach to 236 wickets in Test cricket and, in the process, passed Sir Garry Sobers into seventh place on the all-time list for West Indies.

For Roach, passing Sir Garry is a dream come true and one that will linger forever in his memory.

“It’s amazing. It’s good to be amongst the greats, and to write my name on the wall above Sir Garry is a fantastic achievement which I am happy for,” said Roach.

It was another tough day in the field for the West Indies with Roach sending down 27 overs and conceding 68 runs and picking up two wickets.

Despite the hard toil, Roach says it was a great reward to achieve the feat on home soil.

“There is no better place to do it. The Kensington Oval is the home of cricket in the Caribbean, they say. So it’s good to do it at home, and I am a homeboy as well as Sir Garry, so it’s a good feeling.”

The legendary Sir Garry Sobers was at the Kensington Oval to witness the feat, and Roach says growing up and watching clips of the great man has given him the motivation and drive to aspire to go on and do bigger and better things.

“I have watched clips of him as a boy growing up and he is one of the national heroes of Barbados as well. He is a fantastic role model to follow and he has impacted me in my cricket.”