WI look to hold things together after England’s dominance 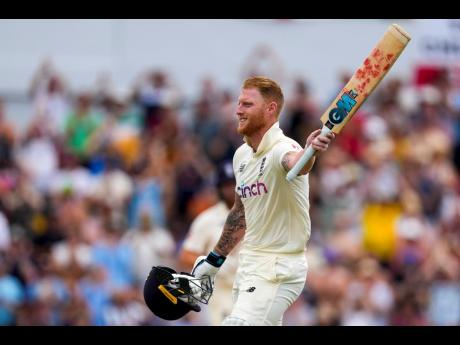 AP
England’s Ben Stokes celebrates after he scored a century against the West Indies during day two of their second cricket Test match at the Kensington Oval in Bridgetown, Barbados yesterday. 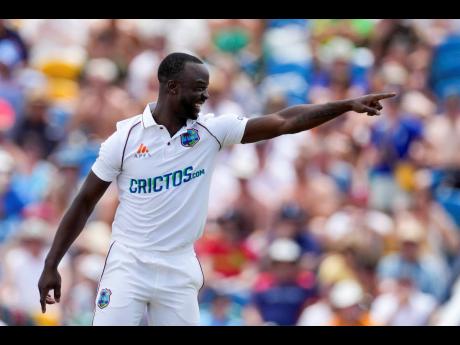 The West Indies (WI) will resume their first innings on today’s third day on 71 for one, trailing by 436 runs, after England declared on a mammoth 507 for nine on the second day of the second Test in Barbados.

Captain Kraigg Brathwaite and Shamarh Brooks will resume on 28 and 31 runs, respectively, after the hosts lost John Campbell to debutant seamer Matthew Fisher for four.

That early loss of Campbell could indicate that the Kensington Oval pitch may be playing a bit different, with some seam movement and spin and bounce on offer, this after England’s batters continued where they left off from the opening-day play.

Captain Joe Root and Ben Stokes resumed the second day on 119 and nought, respectively, at 244 for three, and the pair continued to play positively, adding 100 runs in 140 balls and in reasonable time bringing up England’s 350.

Root would get past the 150 mark, but, soon after, the probing Kemar Roach had to rely on DRS (decision review system) to send the England captain packing via the leg before wicket route, this after putting on 129 runs for the fourth wicket with Stokes.

Stokes then decided that it was his turn to get to three figures, and he did so off 114 balls with 11 fours and four sixes.

After Alzarri Joseph snared the wicket of Jonny Bairstow for 20, it was skipper Brathwaite who would end the brilliant innings of Stokes, when he had the left-hander caught by Brooks for 120 at 424 for six.

Wicket-keeper Ben Foakes and Chris Woakes then put on 75 runs for the seventh wicket, before Veerasammy Permaul broke the partnership, removing Foakes for 33.

Just after getting over the 500-run mark, England would lose another wicket, this time Kemar Roach sent back Woakes for 41, and in the process picked up his 236th Test wicket to go past the great Sir Garry Sobers in the seventh position on the wicket-takers list.

When Permaul had Jack Leach stumped for four, captain Joe Root then signalled the declaration just after tea.

Facing a huge total, the West Indies were looking to bat out the remainder of the evening but, in the second over of the innings, debutant Fisher got opener Campbell to probe at one outside the off stump, and was caught behind for four.

Brathwaite and Brooks then put together a further 25 overs to see the hosts to the close without further loss.

B. Stokes c Brooks b Brathwaite 120

Did not bat: Saqib Mahmood