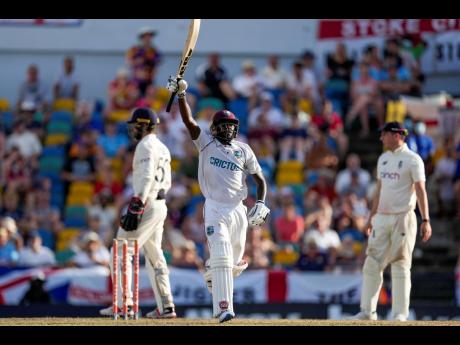 AP
West Indies batsman Jermaine Blackwood celebrates after scoring a century against England during day three of their second cricket Test match at the Kensington Oval in Bridgetown, Barbados yesterday. 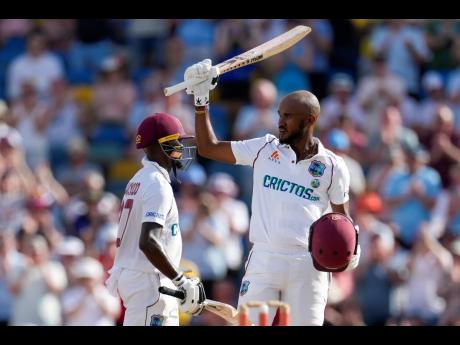 If ever the West Indies needed their two most senior batters to come to the party, the third day’s play at the Kensington Oval was that day. Captain Kraigg Brathwaite and vice-captain Jermaine Blackwood responded admirably to the call by scoring centuries to help the West Indies to 288 for four, replying to England’s 507 for nine declared.

When play resumes today, Brathwaite will be the only one returning to continue his innings, as his vice-captain fell just before play closed on the second day.

Brathwaite will look to press on from his overnight 109 which has so far come off a whopping 337 balls with 12 fours. Blackwood deserved to come back and extend his innings of 102, but he was trapped in front by Dan Lawrence after facing 215 balls and hitting 11 fours.

Instead, it will be nightwatchman Alzarri Joseph who will continue after seeing off 17 balls for his four runs.

Earlier in the day, the West Indies, who resumed on 71 for one, lost two wickets before lunch on the third day to go into the interval at 114 for three.

Shamarh Brooks could only manage to add eight runs to his overnight 31 before he tried to show some aggression against spinner Jack Leach, and was caught at point at 83 for two.

After scoring heavily in the first Test, Nkrumah Bonner was expected to post yet another formidable score on the placid Kensington Oval surface. However, on nine, including two glorious boundaries, the right-hander was trapped in front by Ben Stokes.

After Nigel Duguid gave Bonner out, the dejected right-hander swiftly reviewed the decision as he thought he had got an inside edge. However, TV umpire Gregory Brathwaite upheld the decision to the bewilderment of Bonner and the sparse local supporters.

On the resumption, Brathwaite brought up his slowest Test half-century which came off 167 balls, this after posting his fastest Test 50 in Antigua a few days ago.

He and Blackwood stuck in and frustrated the English bowlers with a 183-run fourth-wicket stand.

It was a dogged and determined partnership by the pair who concentrated throughout most of the day’s play and duly got to their milestones.

Brathwaite first brought up his hundred off 278 balls, after which Blackwood got to three figures after facing 207 balls.

The Jamaican thanked his lucky stars after he almost didn’t get his third Test hundred, as he was bowled off a no-ball by Saqib Mahmood when on 64.

Trailing by 219 runs, the West Indies will be looking to first avoid the follow-on and then try to cut deeper into the England total with still two full days of cricket to play.