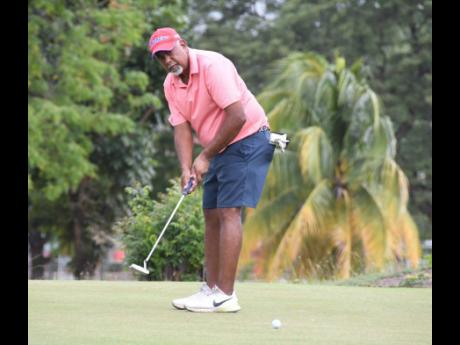 Veteran golfer Sean Morris was in good nick with his new equipment over the weekend, as he captured the two-day Constant Spring Golf Classic.

With some of the island’s top golfers opting to play in the Trinidad Classic, Morris capitalised and won the men’s 0-6 category following rounds of 72 and 67 for a one-under-par 139.

Morris had nine birdies in his total round, including five on Sunday’s final day to finish with three under par for the only under par round of the tournament.

After recently acquiring new equipment, Morris says he is slowly getting back his game and confident of more top finishes heading into the rest of the year.

“I am on my way back with some new equipment, so the journey is going to be a hard one, but having said that, any under par round on any golf course in Jamaica is a commendable score, so I am happy with the win.”

In the meantime, Vikram Dhiman produced rounds of 74 and 79 for a total of 153 to win the 7-12 category. Dhiman’s 13 over par was 11 shots better than Phillip Gooden who finished second with rounds of 80 and 84.

The men’s Super-seniors category was won by Vivian Monteith after carding 84 and 102 for a total of 186. The lone lady to compete, Diane Hudson shot rounds of 90.

Lek Drummond won the Junior 14-15 category following rounds of 100 and 91 while Noah Azan secured the Junior 16-17 category after posting scores of 84 and 81.