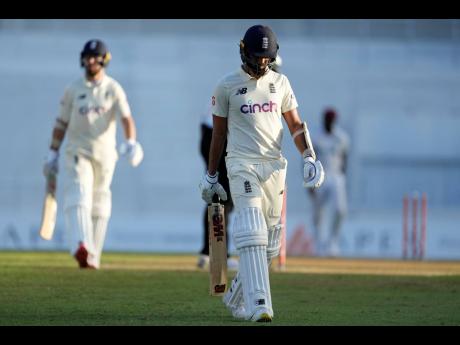 AP
England’s Saqib Mahmood leaves the field after being bowled by West Indies’ Jermaine Blackwood in the last over of day one of the third Test match at the National Cricket Stadium in St George’s, Grenada yesterday.

The West Indies cricket team had England on the ropes and then let a very good position slip after the visitors recovered from a big batting collapse to post 204 all out on the opening day of the third Test in Grenada.

After winning the toss and deciding to bowl, the West Indies were on cloud nine and had the visiting England side nine wickets down with just 114 runs on the board until tail-enders Jack Leach and Saqib Mahmood defied the hosts with a 90-run last-wicket stand.

The cricket displayed by the hosts in the last hour and a half was nothing short of amateurish,as Leach and Mahmood stuck in to dig their team out of a rut, which at one stage was 67 for seven.

Mahmood would fall one short of what would have been a well-deserved half-century with part-time spinner Jermaine Blackwood finally getting the breakthrough.

Mahmood faced 118 balls and hit four fours and a six for his top score of 49, while Leach, who faced 141 balls, was left not out on 41 with five fours.

The last time the number 10 and 11 batsmen top-scored in international cricket was 137 years ago when England played Australia in Sydney in 1885.

It wasn’t all long and glum faces for the regional side and their fans, however, as earlier in the day, they dominated England, picking up wickets with regularity on a surface that was finally offering some assistance to the seamers.

It was, however, medium-pacer Kyle Mayers who got the ball rolling when he picked up the wicket of Zack Crawley for seven and then the big wicket of captain Joe root for nought, with just 29 runs on the board.

Jayden Seales then trapped Dan Lawrence in front for eight just before lunch, and then on the resumption, Alzarri Joseph struck by removing Ben Stokes for just two runs to leave the home side in ecstasy at 53 for four.

Joseph, Seales, and Kemar Roach would combine to snap up five more England wickets quickly to put the home side in total command.

After the fall of Chris Woakes’ wicket at 114 for nine in the 53rd over, the West Indies seemed to lift their foot off the gas and allowed Leach and Mahmood to get stuck in with their valuable partnership.

They first added 50 runs off 133 balls and batted to 80 overs before Kraigg Brathwaite had to summon the second new ball.

After the pair saw off the seamers and were looking to go to stumps without further loss, Blackwood rattled the stumps of Mahmood late in the day to deny the right-hander his first professional half-century.