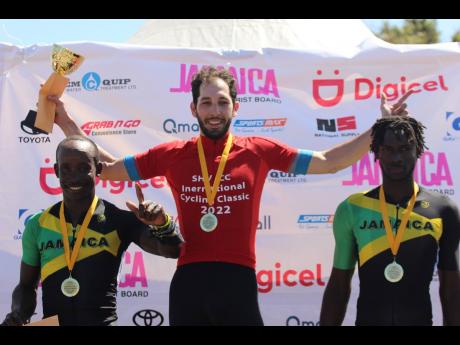 Scarano clocked a time of two hours and seven minutes to claim the elite men’s 57 miles opening stage which took the riders from Whitter Village in Montego Bay, through to Falmouth, then on to Rose Hall and then back again to Falmouth before finishing at Whitter Village.

Jamaican Barrington Bailey, who challenged Scarano for most of the race, finished second while compatriot Jerome Forest claimed third place.

For the American Scarano, it was a well-executed race that saw him picking up 23 points and atop the standings for the overall title with stages two and three to come on Saturday and Sunday.

“It was a good race for me and it wasn’t that much of a difficult race. I executed my strategy as best as I could and made my move late which paid off in the end,” said Scarano.

Bailey, who secured 17 points for his second-place finish, held the lead with Scarano up until the last 10 kilometres. However, the local rider could not keep pace with the American, and had to settle for a distant second to put the Jamaicans on the board with two stages to come.

“I tried my best to keep pace and it was just a bit too much for me in the end, but I am glad that I came up in the running and it will be more intense for today’s second stage,” said Bailey.

The Jamaica Under-23 pair of Kevon Pryce and Alex Morgan led at one stage after 14 kilometres. However, they faded back before Scarano took control after 19 kilometres with a 20 seconds lead.

Jamaican Andrew Ramsey also broke away from the peloton and held the front position for some time along with Scarano, Bailey and Shawn Jeffrey.

After the opening stage, Team Jamaica Elite One leads the team standings with 29 points followed by Scarano’s team, 706 P, with 28, Team Jamaica Under 23 on 14 and Team St Vincent with two.

Today’s second stage will see the riders taking on the hilly Whitter Village to Discovery Bay and back 86-mile run.