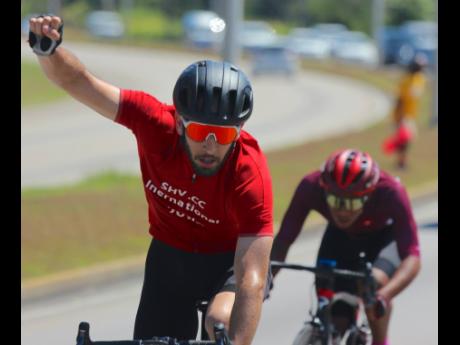 The American finished the return 50-mile Whitter Village to Duncans stage in under two hours to edge out 14-year-old Jamaican Cajur Chue of Team MoBay, with Russell Small finishing third.

Scarano, riding for Team 706P out of the United States, secured another 23 points to finish with a total of 69 points, a whopping 43 ahead of Team Jamaica Under-23 cyclist Khori Mauricette, who finished second overall with 26 points.

For his efforts, Scarano took home the US$1,000 overall prize money along with the JMICC Trophy. The American was very happy to secure the inaugural title.

“It’s a wonderful feeling. I couldn’t do this without my team, but I just loved being out there. Jamaica has some strong riders, which made it competitive, and the experience riding here is just awesome, and I will surely be coming back next year.”

Second-place finisher Mauricette said the experience of riding with the American winner has given him the motivation to take his cycling to another level.

“Congratulations to Scarano. He is on a different level, and I will have to step up my training to match these guys, but the experience was awesome, and I would love to have more international races like this so that I can have the high level of competition, which will make me better.”

For 14-year-old Chue, the hard work has paid off and things can only get better from here onwards.

“I worked hard, and it paid off. I want to be able to make my mark in cycling and make it to the next level, so this exposure to top-level cycling so early in my career will only make me better.”