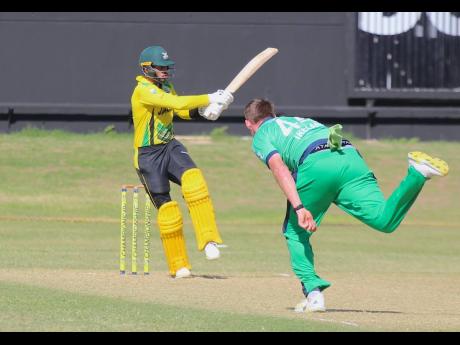 The Jamaica Cricket Association (JCA) in conjunction with title sponsors Dream XI out of India will bowl off the Jamaica T10 Blast competition with the Middlesex Titans taking on the Surrey Kings at 10:45 a.m. in the first match of a double-header at Sabina Park.

In the second game of the inaugural tournament at 1:30 p.m., the Cornwall Warriors will face off with the Surrey Risers.

The six-team tournament, which will feature 33 matches over 17 days, also includes the Surrey Royals and the Middlesex United Stars.

Several local West Indies players will be on show to audiences as far as India and the subcontinent, as the matches will be streamed live on the JCA social-media platforms.

The Middlesex Titans will have former West Indies T20 player Krishmar Santokie as their captain along with national off-spinner Jamie Merchant and the hard-hitting batsman Tristan Coleman in their team.

The Cornwall Warriors will round out the six-team competition with national players Marquino Mindley, Derval Green and Paul Palmer Jr leading their charge.

Jamaica Cricket Association CEO Courtney Francis is beaming with pride as the T10 Blast competition symbolises a restart of cricket at the national level in Jamaica since the pandemic.

“Cricket is back and it is very important for us at the JCA to restart. We tried to have this tournament last year but due to the pandemic, we had to reschedule. Now that we have gotten the go-ahead, we are using this competition to kick-start our white-ball programme. Right after this competition, we will be having our 50-over tournament,” said Francis.

The winner of the inaugural T10 Blast cricket tournament will walk away with the first prize of US$4,000 with the runner-up team pocketing US$2,000. Spectators will be able to watch all 33 matches free of cost from the George Headley Stand at Sabina Park.