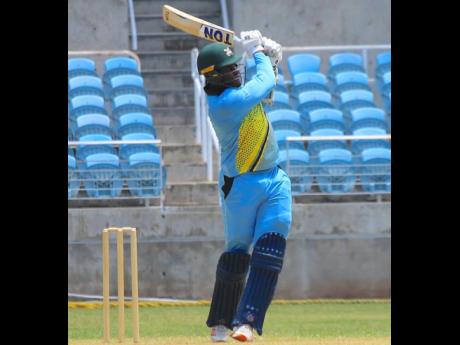 Lennox Aldred
Surrey Titans opener Leroy Lugg on the go during his unbeaten 50 against the Middlesex Titans in the Dream XI Jamaica T10 encounter at Sabina Park yesterday.

Jamaica opening batsman Leroy Lugg scored a second half-century in the Dream XI Jamaica T10 competition to guide his team, the Surrey Royals, to a nine-wicket win over the Middlesex Titans in the latest set of matches at Sabina Park yesterday.

The right-handed Lugg followed up his 51 against the Middlesex United Stars in the opening encounter with an unbeaten even 50 against the Titans, who easily chased down the 93 runs needed for victory by scoring 98 for one.

The pair shared in a 96-run unbeaten second-wicket partnership to see the Royals to their second victory of the competition.

Earlier, pacer Nicholson Gordon picked up the first hat-trick of the competition to restrict the Titans to 92 for seven in their allotted 10 overs.

Bowling the final over of the innings, Gordon first had Errol Thomas caught by Raewin Senior for 17, then he had Sherdon Allen caught by Bonner for two. His hat-trick wicket would be that of Jamaine Morgan who was bowled for a duck.

In the first match of the double-header, the Cornwall Warriors defeated the Middlesex United Stars by seven wickets.

The Stars could only manage to get to 81 for seven in their 10 overs with Sashane Anderson top-scoring with 22 and John Campbell getting 14. Captain Michael Frew continued his good form with the ball, bagging four wickets for 16 runs while Omar Samuels claimed two for 13.

Opener Ockeeno Farquharson then hit 21 from 14 balls to set up the run chase which was finished off by Andre McCarthy who was left not out on 17 from 10 balls to guide the Warriors to 87 for three.