Risers, Kings secure wins to close out round four of JCA T10 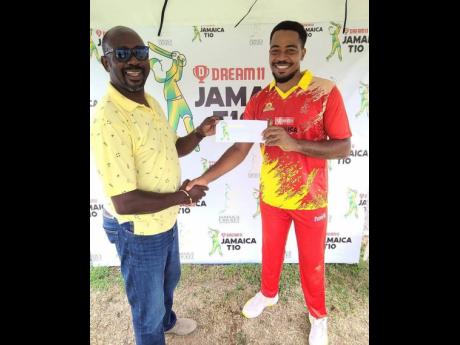 Lennox Aldred
Surrey Risers off-spinner Akim Fraser (right) collects his Man of the Match award from Fritz Harris, second vice-president of the Jamaica Cricket Association at Sabina Park yesterday. Fraser took three for 18 for the Risers who defeated the Surrey Royals by 26 runs yesterday in the Jamaica T10 cricket competition.

The Surrey Risers and the Surrey Kings both secured victories over the Surrey Royals and Cornwall Warriors, respectively, as fourth-round action in the Dream XI Jamaica T20 culminated on Sunday at Sabina Park.

In the opening match of the doubleheader, the Surrey Risers defeated the Surrey Royals by 26 runs. The Risers batted first and posted 88 for five in their 10 overs, with Sadique Henry top-scoring with 39 from 27 balls with four fours and a six.

In reply, the Royals could only manage to get to 62 for nine, with Raewin Senior getting 24 and opener Leroy Lugg 19.

For Fraser the outing with the ball was pleasing, seeing that his team got the all-important first win of the competition following three straight defeats.

“I am happy with my performance. The batters were not as strong hitting off the back foot, so that was a big part of my plan to keep them pegged back, and I am glad that I was able to go out and execute my plan,” Fraser, who took three for 18, said.

In the second game of the double-header, the Surrey Kings kept their unbeaten record intact following a four-wicket win over the Cornwall Warriors. The Warriors posted 75 for six after being asked to take first strike with Jevoy Spence and Kerry Holness getting 12 runs each.

Shalome Parnell snared three wickets for eight runs from his two overs for the Kings who made hard work of the run chase, getting to 76 for six in 8.3 overs.

Andre McCarthy led the way with 22 from 11 balls with one four and two sixes. Damion Ebanks and Jermaine Levy took two wickets each.

The Kings continue to lead the standings with a maximum 12 points from four games followed by the Cornwall Warriors, the Middlesex Titans and the Surrey Royals, who are all on six points each with two wins and two losses.