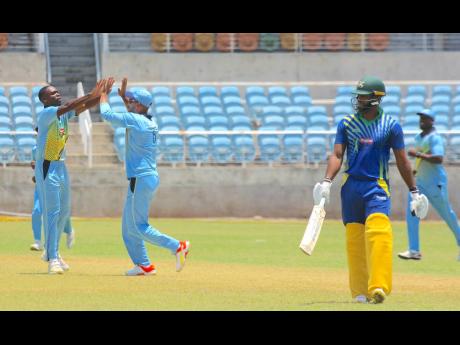 AT LEAST one of the Surrey teams got some match action in the Dream XI Jamaica T10 yesterday, as the Surrey Royals got the better of the Cornwall Warriors in the latest set of matches at Sabina Park.

Leaders, the Surrey Kings, had to settle for just a point, as their game against the Middlesex Titans was abandoned without a ball being bowled due to rain.

In the opening encounter, the Royals comfortably defeated the Warriors by eight wickets. The Warriors were blown away for a mere 58 runs in 9.2 overs with in-form pacer Nicholson Gordon bagging three wickets for 13 runs from his two overs.

The Kensington fast bowler has now a competition-leading 12 wickets in five matches with the best bowling figures of four for 21 and a strike rate of 4.17.

Spinners Peat Salmon, Ryan Francis and Raewin Senior picked up two wickets each with only Derval Green with 13, Ockeeno Farquharson, 12 and Paul Palmer, 11, getting into double figures.

In reply, The Royals crawled to 59 for two in 8.2 overs, with Carlos Brown leading the way with an unbeaten 25 from 18 balls with three fours and a six. Javelle Glenn chipped in with 16.

The Royals now move to second position in the standings with nine points from five games while the Cornwall Warriors occupy fourth with six points.

Head coach of leaders Surrey Kings, Milton Thomas, bemoaned the fact that his team could not get the chance to make it six straight wins. However, he is pleased with the point which now sees the team continue to lead the standings with 16 points.

“We have a good team spirit and the camaraderie is very good. We have some guys who have all stepped up and played their part. The skipper (Jermaine Blackwood) has gotten a few runs and we have players like Lewis and Royal who have all contributed with the bat along with young Brad Barnes,” said Thomas.

Thomas said he was keen to go all the way to the championship match and is urging his players to remain focused despite hiccups such as the unforeseen weather.

“We are playing good cricket and we plan to stick to the basics and make it as simple as possible. If we continue on that path and not try anything unnecessary, we will be in good stead.”