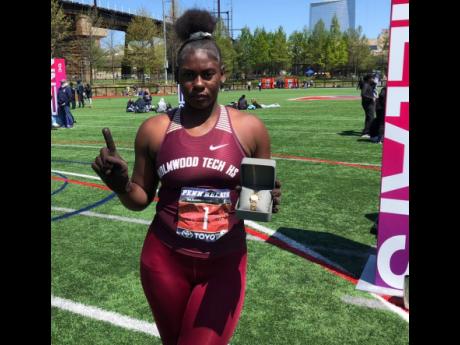 After capturing the gold medal in the Championships of America discus event at the Penn Relays yesterday, Holmwood Technical High School’s Cedricka Williams says she is feeling a lot more confident and relaxed ahead of this year’s World Under-20 Championships.

Williams threw a personal-best mark of 54.00m to win the event, and in the process erased her previous best of 53.91m, at the Franklin Field stadium. However, despite getting a personal best, Williams remains second in the world behind South Africa’s Mine De Klerk, who has thrown 54.22 metres this season.

“This will help as I look to the World Under-20 Championships because I am more confident now, and my technique is getting better and better,” Williams said.

“When I remember that at the ISSA/GraceKennedy Boys and Girls’ Championships I didn’t perform that well, but bounced back at the Carifta Games with a gold medal, and I came here and got another gold and personal best, that is very amazing for me,” she said.

The 17-year-old added that the event was very challenging, due to the cold temperatures she experienced throughout the competition and therefore she had to pull out all the stops to ensure that she came out on top.

“I had to be calm throughout the event, and I believe in my coach, and so I just went out and executed well,” she said.

“I am feeling proud of myself because I was also confident of the victory,” Williams said. “At the beginning of the throws, I was very cold because there was no sun, so my throws kind of faltered at the start. But I was able to make the top eight, then compose myself at the fourth throw with a personal-best mark,” she said.

Victoria Christie of Camperdown High School threw 44.88m on her sixth and final attempt to complete a Jamaican one-two finish in the event.