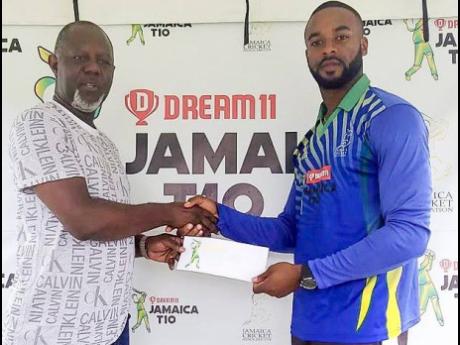 Middlesex United Stars chalked up their third win on the trot, following a 19-run win under the Duckworth Lewis Method over the Surrey Risers, in their Dream XI Jamaica T10 encounter at Sabina Park.

After deciding to bat, the Risers could only get to 72 for six in their allotted 10 overs, with Delbert Gayle top-scoring with 27 from 18 balls and Nicholas Lewin getting an unbeaten 15.

Man of the Match Ojay Shields took two for nine from his two overs with Andel Gordon bagging two for 13.

In reply, United Stars were well on their way at 71 for one when rain ended play, with left-hander Alwyn Williams unbeaten on 31 and Damani Swell 16 not out. Captain John Campbell made 20.

The United Stars have now secured four wins to go with their four losses and continue to occupy the second position in the standings on 12 points.

It was the fifth loss for the Risers who continue to sit at the foot of the six-team table with six points.

In the second match of the double-header, Cornwall Warriors defeated Middlesex Titans by six wickets.

Asked to take the first strike, the Titans reached 106 for the loss of six wickets with Tristan Coleman top-scoring with 23 and Oshane Walters weighing in with 20.

In reply, the Warriors left it late to get to 107 for four with Ockeeno Farquharson leading the way with 29 from 14 deliveries with three fours and two sixes.

McCarty chipped in with 23 runs from 11 balls with three fours and one six. Jamie Merchant took two for 21.

The win for the Warriors pushes them to 12 points in the fourth position while the loss for the Titans sees them in the fifth position with seven points.

The competition continues today with another double-header as Titans face the Surrey Royals in the opening encounter before leaders Surrey Kings take on the Surrey Risers.