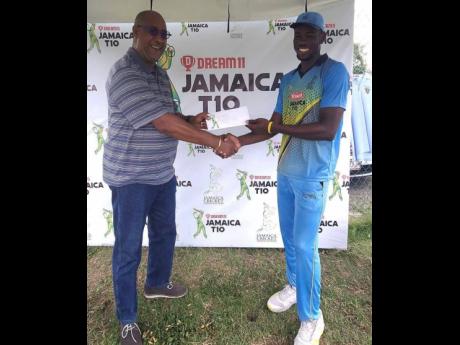 The Surrey Royals leapt to the top of the Dream XI Jamaica T10 standings following a 55-run win over the Surrey Risers at Sabina Park yesterday.

The Royals were asked to take the first strike and wasted little time in amassing 139 for four off their allotted 10 overs.

The pair added 108 for the third wicket after they lost Romaine Morrison for four and Leroy Lugg for one to pacer Christopher Powell, who bagged two wickets for 20 runs.

Facing a daunting target, the Risers could only get to 84 for five in 10 overs, Sadique Henry made 21 and Ricardo McIntosh, 20, against four wickets for six runs from pacer and Man of the Match Khari Campbell.

For Campbell, the assignment was simple, and that was to pick up wickets to ensure that his team got over the line.

“The skipper told me to just come and bowl a hard length and stick to the plan. The pitch was offering a little juice and I just did what I had to do and not get carried away.”

The win for the Royals sees them jump to 18 points from nine games, two points ahead of previous leaders, the Surrey Kings.

The United Stars posted 91 for four from their 10 overs, with Anthony Walters getting an unbeaten 36 from 19 balls.

The Titans then got to 92 for two in 9.5 overs, with Wayne Davis making 47 and an unbeaten 21 from Tristan Coleman.

On Saturday, the Surrey Royals beat the Middlesex Titans by seven wickets, after which the Surrey Risers defeated the Surrey Kings by six wickets.