Another class act expected from Atomica 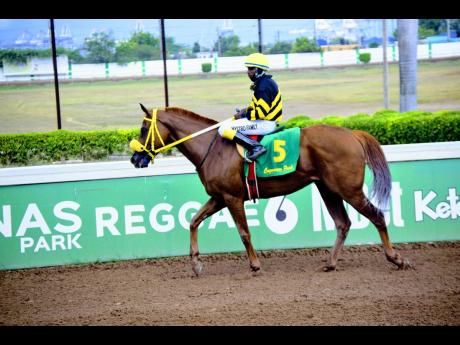 ATOMICA’s class act in the Thornbird Stakes, after being slammed into by OUTBIDDER at the off, seven and a quarter lengths clear of runner-up GOLDEN WATTLE, makes Gary Subratie’s runner a tough horse to beat in Saturday’s fillies-only Portmore at seven and a half furlongs.

After steadying the chestnut speedster, Dane Dawkins rode PRNCSSHOOTINGSTAR’s jetstream into the lane before unleashing ATOMICA a furlong and a half out. GOLDEN WATTLE was third a furlong out when Dawkins turned on the afterburners and ATOMICA ran away, though drifting out a bit, to outclass her seven rivals.

Anthony Nunes’ NEFERTARI, who walked out of the gate last – but quickly found out beating maidens, after pulling off a similar stunt on debut, was a different kettle of fish among non-winners-of-two – returns fitted with a visor and worked really well last Sunday morning, clocking 1:13.3 for six furlongs on a fast surface out the mile chute.

Though she can’t be faulted in the mornings, NEFERTARI appears to have issues in the evenings, rearing while being loaded on last, before crawling out behind the field and trailing in next-to-last. Whether blinkers will make a difference is left to be seen.

ATOMICA, however, is yet to show a chink in her armour as she counts down towards the 1000 Guineas set for June 4. Whereas NEFERTARI posted 1:13.3 Sunday morning, ATOMICA’s 1:13.3 was listed as ‘easy’ by the clockers, suggesting that Dawkins was out on a stroll aboard the Guineas favourite.

Dawkins should tick off back-to-back winners on the 11-race card, returning aboard MAHOGANY in an overnight allowance at six furlongs. The chestnut gelding ran smack into a super-fit foreigner, RUNAWAY ALGO, when reporting off a seven-month lay-up on Easter Monday. Finishing three-quarter length off 1:05.2, carrying topweight 126lb, computes to winner-next-time-out.