Marlon Powell innings takes the game away from Excelsior 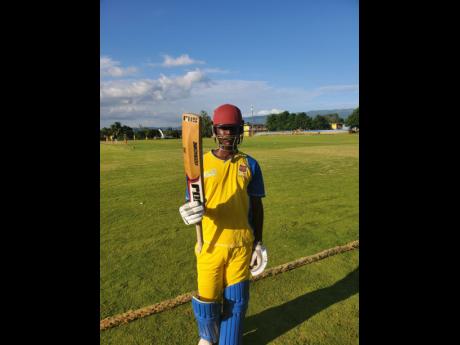 Kavarly Arnold
St Elizabeth Technical High School’s Marlon Powell raises his bat after leaving the field of play in the semi-final of the ISSA/GraceKennedy U19 T20 competition at the St Elizabeth Sports Complex yesterday. Powell scored a brutal 70 to help his team get the better of Excelsior High School.

A BRILLIANT half-century from Marlon Powell steered St Elizabeth Technical High School (STETHS) into the finals of the ISSA GraceKennedy T20 Cricket Competition with a six-wicket win over Excelsior High School at the STETHS Sports Complex in Santa Cruz, yesterday.

The Headley Cup champions will play Wolmer’s Boys in the final after they defeated Manchester High by six wickets in the early semi-final.

Batting first, Excelsior posted 150 for the loss of five wickets. Norris Tenn top-scored with an unbeaten 50 and was supported by Brandon English, 47. Govesta Edmond, Reshawn James, and Javid Simpson took one wicket each for STETHS.

In reply, STETHS made light work of the total, getting to the target with four overs and two balls to spare.

The hosts got off to a good start despite Tamari Redwood’s piece of brilliance in the field. Redwood took a diving catch at slips off the bowling of English to dismiss Tyrick Bryam for seven.

But Powell walked to the crease with attacking intent. He kept the scoreboard ticking over in between brutal boundaries, with Sean Roye chipping in mercilessly.

Roye was dismissed for 40 off the bowling of Caven Malcolm.

Losing his partner did not stop Powell, who top-scored with 70 after a wasteful shot saw him lose his wicket with five wickets to win. The hosts won with 26 deliveries to go.

Man of the match Powell was pleased with his performance though there was some disappointment at not seeing it through to the end.

“Yes, it was a good knock although, in the end, I gave away my wicket, which was not good. My team was looking for me to take it over the line.

“The team’s overall performance was good. With the ball, we didn’t have our best performance because our goal was to restrict them to under 100 runs, but their batters did well. However, with the bat, I had to stand up, and my teammates chipped in as well. We are a very talented unit and just have to keep putting in the work,” said Powell, who has personal aspirations of being a professional.

“I am looking forward to making a career out of cricket, so I have to just continue to do well and be consistent. I am already in the set-up and want to make the Under-19 team, so I’m looking forward to another opportunity in the final to bat,” he added.

Excelsior’s coach Kirkland Bailey believes that the pressure of playing STETHS in their backyard got the better of his players.

“I think it was a fair performance. We did well with the bat, scoring 150, which was okay. Where I am disappointed is our effort in the field and bowling. I know we could have done much better, but I guess the pressure of the environment got the better of them,” said Bailey, who is already looking forward to next season.

“It’s the first loss of the season after winning the Grace Shield and making it to the T20 semifinals. A bitter pill to take, but we will move on because we are a team with so many youngsters who only lost to a perennial stronghold.”

In the earlier game, Manchester, batting first, were skittled out for 95, thanks to two wickets apiece from Matthew Aljoe, Nicholas Holding, and Jordan Johnson.

In reply, an unbeaten 30 from Justin Beckford helped push Wolmer’s to 96 for four. Jordon Johnson also chipped in with 30, and Alex Hinds was left unbeaten on 11.