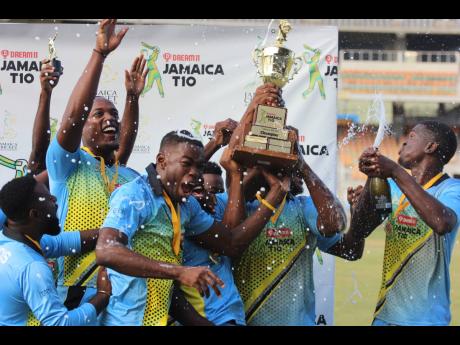 The final of the Dream XI Jamaica T10 competition saw two Surrey teams battling for the top prize, and at the end, it was the Royals who reigned supreme over the Kings, winning by four wickets at Sabina Park yesterday.

The grand final was always likely to be a battle of the big bats, and the bats surely did come to the party as the Kings posted 110, which, in the end, proved not to be enough as the Royals got over the line in 9.1 overs as they got to 114 for six.

After asking the Kings to bat first, the Royals struck in the second over when captain Jermaine Blackwood was bowled by Peat Salmon for 10. Salmon then struck again in his second over when he had Kirk McKenzie caught, also for 10.

Wickets would continue to fall just as the Kings were looking to press on with their innings, and it was the burly opener Kennar Lewis who kept the innings together with a workmanlike 52 runs from 32 balls with one four and five sixes.

It took Lewis a while to get going, but when he did, he despatched the Royals bowlers to all parts of Sabina Park.

Left-arm spinner Ryan Francis felt the blade of Lewis as he conceded 29 runs in his two overs despite picking up two wickets. Seamer Khari Campbell also came in for a thumping, conceding 20 runs in the penultimate over. Campbell finished with one for 25, with spinner Raewin Senior bagging two for 14.

The Royals began the run chase confidently by adding 38 runs in the first three overs before pacer Andre Dennis sent back the opening pair of Romaine Morris and Leroy Lugg for 15 and 21 runs, respectively, in his second over.

The match stood on a knife edge when captain Javelle Glenn (0) and Nkrumah Bonner (10) fell at 63 for four in the sixth over. However, Carlos Brown and Peat Salmon restored parity with a 30-run fifth-wicket partnership.

Brown hit four fours and three sixes in his 14-ball knock of 37. Those three sixes came off the bowling of Oraine Williams, who conceded 25 runs in the seventh over, which virtually took the match away from the Kings.

Man of the Match Salmon was left not out on 21 runs from eight balls to take the Royals within one run of victory. The formalities were finished off by Jamie Hay, who hit the first ball of the final over for four to seal the win.

Winning captain Javelle Glenn praised the resilience of his team, which, in the end, saw them top the first-ever T10 competition in Jamaica.

“Winning this first T10 tournament is tremendous. I am very pleased with the way we went out and fought hard, and I thought our bowlers came to the party for us this tournament,” said Glenn.

Losing captain Jermaine Blackwood lamented the fact that his team failed to execute their bowling plans.

“We knew that 111 runs were going to be hard to get, and we backed our bowlers to defend it. Credit to the Royals for playing some good cricket,” said Blackwood.

In the meantime, Middlesex United Stars captain John Campbell, who finished with the most runs, 302, was named most valuable player of the tournament. Nicholson Gordon of the Royals claimed the most wickets, 18.

Wicketkeeper Jevoy Spence (8) had the most dismissals, while Carlos Brown (7) had most catches in the outfield.