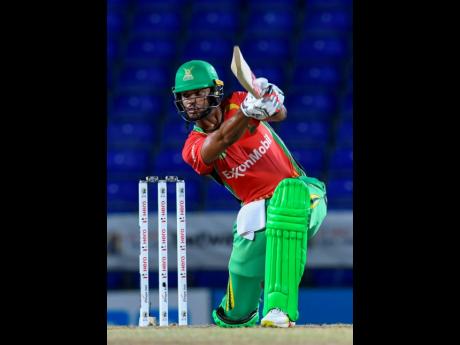 West Indies batsman Brandon King has been drafted into the Jamaica Scorpions 15-man squad that will take on the Windward Islands Volcanoes when the third round of the West Indies Championship gets underway in Trinidad & Tobago next Wednesday, May 18.

King will be joined in the squad by wicketkeeper Aldane Thomas, who also regains his place with Romaine Morris making way.

King, along with batsman Nkrumah Bonner, will only be available for the Volcanoes clash, as they are expected to join up with the senior West Indies team for their tour of the Netherlands and Pakistan later this month.

Batsmen Alwyn Williams and Brad Barnes are expected to join the team in Trinidad, to replace King and Bonner for the final two rounds against the Guyana Harpy Eagles and the Leeward Islands Hurricanes.

The Scorpions will have their work cut out in the remaining fixtures as they look to lift themselves from the foot of the six-team standings and build on the 8.8 points they have so far.

Head coach Andre Coley is hoping that the injection of the experienced King and Thomas can shore up the team’s batting, to complement the consistent bowling unit.

“I believe everybody appreciated the fact that we underperformed in the earlier rounds against Trinidad and Barbados. We are looking for more consistency, especially from our batting,” said Coley.

Coley believes that scoring runs will not be a major concern for the team, which has consistently done so over past seasons.

However, the coach wants the batters to dig deeper and build on the starts that the team has gotten, and transfer them into bigger scores and bigger partnerships.

“We are a team that scores and, over the years, our run rate has always been healthy. It is all about batting time and accepting personal responsibility from a batting standpoint, and having more significant partnerships,” he said.

The Scorpions coaching staff which includes Coley and assistant Andrew Richardson, have intimate knowledge of the Volcanoes team. Both Coley and Richardson have had stints as head coaches with the Windward franchise a couple of years ago.

Coley, however, believes there will be no advantage as the Volcanoes players also know their coaching style and methods.

“The key is to use that knowledge to simplify things. That is what is going to be important. Sometimes, too much information can be paralysing and we need to make sure that we prioritise what information is going to be most useful to us, in terms of helping our campaign,” added Coley.