Captain Campbell looking to lead from the front against Volcanoes 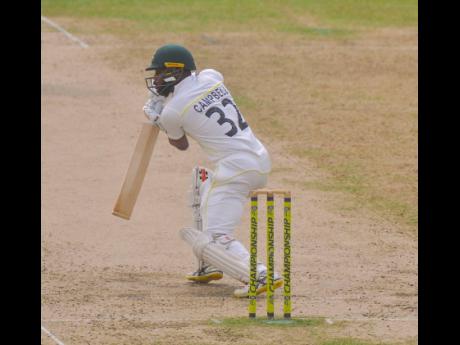 After sweeping the MVP award at the recently concluded Dream XI T10 competition for the Middlesex United Stars, Jamaica Scorpions captain John Campbell will be hoping that his table-topping run-scoring form will continue when the Jamaican franchise takes on the Windward Islands Volcanoes in the four-day West Indies Championship starting tomorrow in Trinidad and Tobago.

In his 10 innings in the T10 tournament, Campbell scored three half-centuries with a top score of 82 in his 302 runs, and the left-hander is keen to add another century and more to the more than 213 runs that he has scored in the two matches played so far in the 2022 four-day season.

A masterful 127 against Barbados prompted the West Indies selectors to recall Campbell against England, but modest returns in the Test series have pushed the St Mary native to go out and get more runs to prove his worth.

“For every batsman, whenever they go out to bat, they look to score a hundred, and it’s no different for me. It doesn’t happen all the time, but that is my aim,” said Campbell.

The last couple of weeks were all about attacking cricket for Campbell and a number of the Jamaican batsmen who took part in the T10 tournament, however, the 28-year-old says preparations for the longer format have been going well, and it is all about execution come Wednesday.

“We had the opportunity of playing a three-day practice game before we left Jamaica, and we had quite a few net sessions with Coach Coley before and after the T10’s where we focused on the longer format,” added Campbell.

It is no fluke that the Jamaica team has not found their mojo in this year’s competition as they currently are at the foot of the table on 8.8 points from their two games.

With that said, Campbell is keen to put those two losses against Trinidad & Tobago and Barbados behind him and start afresh to put some more points on the table with three rounds remaining.

“The previous two rounds were some time ago, and it’s almost as though we’re starting from zero again, though the points standing won’t reflect that. What we must do now in this round is to start well and execute what we have been doing in practice.”