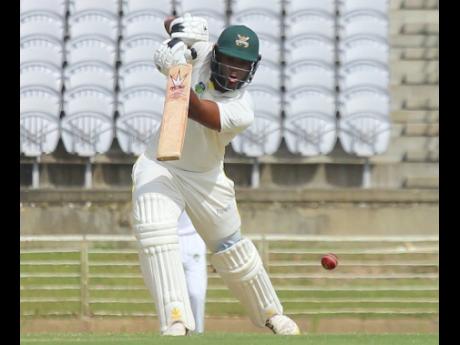 Lennox Aldred/Freelance Photographer
Jamaica Scorpions captain John Campbell plays a cover drive on his way to 48 in his West Indies Championship game against the Windward Islands Volcanoes at the Brian Lara Cricket Academy on Wednesday.

Captain John Campbell fell just two runs short of a well-deserved half century, as the Jamaica Scorpions replying to the Windward Volcanoes 137, reached 118 for four at stumps on day one of their West Indies Championship match at the Brian Lara Cricket Academy.

Campbell’s blistering knock of 48 came off 50 balls with seven fours and a six, as he and opener Leroy Lugg put on 71 runs for the opening wicket.

Lugg chipped in with 36. Jermaine Blackwood fell in the final over of the day for 26. Night watchman Marquino Mindley is not out on one as the Scorpions trail by 19 runs on first innings. Preston McSween has so far taken two wickets for 38 runs.

Earlier, Mindley bagged a career-best five wickets as the Windward Islands Volcanoes were dismissed for 137 in their first innings at tea in their West Indies Championship third round match on day one.

Mindley, bowling from the media centre ended with five for 20 from 12 overs.

Over at the Queens Park Oval, The Guyana Harpy Eagles closed day one on 219 for four against the Barbados Pride. Tagnerine Chanderpaul is not out on 64, while Tevin Imlach made 53. Akeem Jordan has so far taken two wickets for 50 runs.

At the Diego Martin Sports Complex, the Leeward Islands Hurricanes reached 308 for seven against the T&T Red Force. Opener Kieran Powell hit 139 with Amir Jangoo getting 58. Jayden Seales has so far bagged two for 35.