King half century pushes Scorpions ahead of Volcanoes 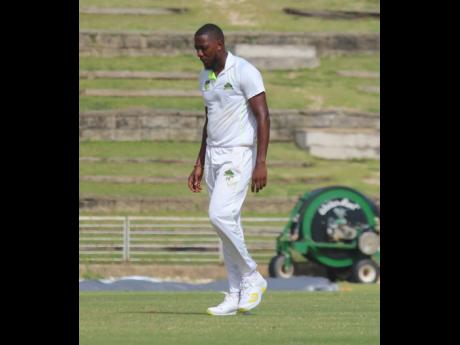 Right-handed batsman Brandon King scored an unbeaten half century to guide the Jamaica Scorpions to 219 for seven, a lead of 82 runs against the Windward Islands Volcanoes at lunch on day two of their West Indies Championship match at the Brian Lara Cricket Academy.

King will resume on 53, which has so far come off 62 balls. Wicket-keeper Aldane Thomas is not out on 20, as the pair has so far shared in a 58-run unbroken eighth-wicket partnership.

The Jamaicans, this morning, lost night watchman Marquino Mindley for five after which pacer Josh Thomas sent back Paul Palmer for 15. Thomas then struck again when he had Derval Green caught at cover for a duck.

Thomas has, so far, taken three wickets for 39 runs with Preston McSween bagging three for 75.

Over at the Queens Park Oval, opener Tagenarine Chanderpaul is unbeaten on 103, as the Guyana Harpy Eagles head to lunch at 313 for five against the Barbados Pride. Veerasammy Permaul is not out on 34. Wicket-keeper Anthony Bramble retired hurt on 38, as captain Leon Johnson chipped in with 37 against two wickets each for Raymon Reifer and Akeem Jordan.

At the Diego Martin Sports Complex, the Trinidad & Tobago Red Force are reeling at 19 for four at lunch, replying to the Leeward Islands Hurricanes' first innings score of 357. Yannic Cariah is on 9 and with him is Joshua Da Silva on one. Pacer Jeremiah Louis has so far taken three wickets for four runs.