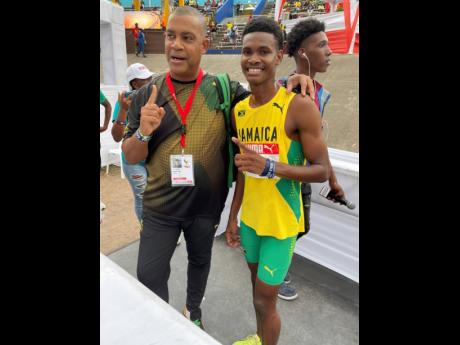 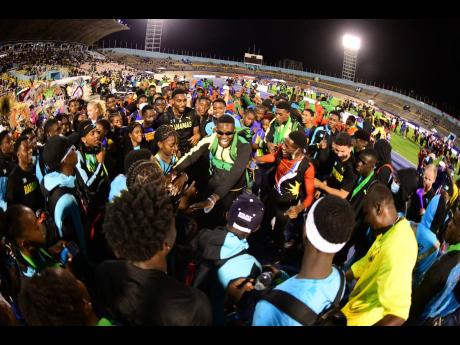 Gladstone Taylor/Multimedia Photo Editor
Caribbean athletes gather and dance at the end of the 49th staging of the Carifta Games at the National Stadium on Monday, April 18.
1
2

May is recognised as Mental Health Awareness Month and the Jamaica Association of Sports Medicine (JASM) is promoting mental health awareness among Jamaican athletes.

He said mental health can be positively affected by sports as, when exercising, the body releases good chemicals such as endorphins that help to keep one’s body physically and mentally well but studies show that just over one in three athletes may experience mental health symptoms.

Dr Hamilton said athletes face mental health challenges such as fear of failure, anxiety and depression that comes from many factors impacting their mental wellness, such as physical injury and performance pressure, as well as life challenges such as grief.

“The great basketball player Michael Jordan said ‘the difference between a good athlete and a great athlete is their minds’, he said. “So the importance of a sports psychologist is to help the athletes understand that other part of their body (the brain) that they need to train.”

According to a 2019 Pan American Health Organization (PAHO) report, the treatment gap for mental disorders in the Caribbean region ranges from 37.4 per cent (non-affective psychosis - includes schizophrenia) to 64.0 per cent (bipolar disorder - a mental health condition that causes extreme mood swings).

Dr Hamilton said many Jamaican athletes who are experiencing mental health disorder often go untreated, but this needs to change.

“What coaches and the staff surrounding these athletes could do is make themselves more cognisant and aware of sports psychology and the mental health for athletes,” he said.

He said there are many ways people can ensure athletes keep mentally well.

“Entourage members should foster psychologically safe athletic environments, reduce the stigma around the discussion of mental health, work with athletes to better understand the stressors they face in their lives, and respond to an athlete in distress,” he stated.

He said mental health awareness, as it relates to sports, is improving in Jamaica.

“I see situations like the president of the JOA (Jamaica Olympic Association) and many other national organisations seeing the importance of having a sports psychologist as part of the sports medical team,” he said.

However, Dr Hamilton said there is room for improvement.

“More improvements need to be made still (because) it is not everywhere that they are doing it,” he said. “I think we have come a long way but we need to go further, because I am currently the first sports psychologist to travel with the Jamaica Olympic team to the Olympics, and I was one of the first to be a part of the sports medical team at the Carifta Games.”

The toolkit is aimed at assisting Olympic Movement stakeholders, including international federations, national Olympic Committees, national Paralympic Committees, athletes’ entourage members, healthcare professionals and other stakeholders such as national federations, clubs and teams, to develop and implement initiatives related to the protection and promotion of mental health and well-being in elite athletes.

Dr Hamilton has also published a number of works in regards to mental health and Jamaican athletes.