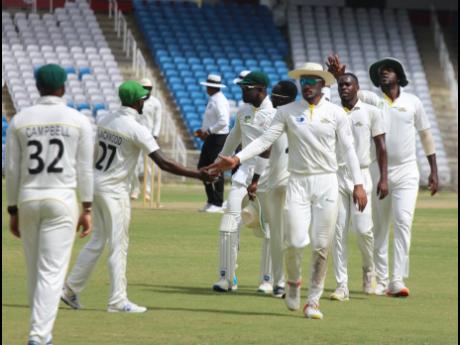 Jamaica Scorpions all-rounder Derval Green says a total team effort was the main contributing factor to the team’s impressive innings and 14 runs win over the Windward Islands Volcanoes on the third day of their West Indies Championship match at the Brian Lara Cricket Academy in Tarouba yesterday.

Green was one of the standout performers on the third day, bagging a career-best five wickets for 46 runs, as the Volcanoes, facing a deficit of 209 runs, folded for 195 in their second innings.

Off-spinner Jamie Merchant also stood tall with the ball following a man-of-the-match performance which saw him also claiming career-best figures of five for 72.

It was Merchant who did the brunt of the damage in the morning session after the Volcanoes resumed on 101 for three and lost wickets steadily throughout the session.

Merchant had Akeem Auguste caught at slip for 11, then he picked up two wickets in the 60th over when he bowled Keron Cottoy for 21 and Denis Smith for a duck.

The right-arm spinner then claimed his fifth wicket when he had Sherman Lewis caught by Blackwood at slip for six.

With the Volcanoes reeling at 190 for eight, it was the turn of Green, who had three wickets to his name, to mop up the innings, and he did just that, as Preston McSween was caught by Merchant for four and the very next ball he trapped last man Josh Thomas in front for a duck to claim his fifth wicket of the innings.

Captain Kavem Hodge tried to hold the innings together with a fighting 63, but the Scorpion bowlers were too good on the day and in the end secured their first win of the 2022 regional campaign.

“We always knew that as a team we can come up with performances like this. We have done it in the past and Friday’s performance is a testament to the work that we have been doing,” said Green.

In the meantime, the Leeward Islands Hurricanes are also on the verge of securing maximum points against the Trinidad and Tobago Red Force in their game at the Diego Martin Sports Complex.

At stumps on day three, the Red Force were 143 for six, still needing a whopping 316 runs to win after the Hurricanes set the hosts a target of 459.

Yannic Cariah is not out on 36 and Bryan Charles on six. Pacer Jeremiah Louis continues his hot streak with the ball by claiming another three wickets to add to the four he took in the first innings.

Earlier, the Hurricanes posted 241 for seven batting a second time with Kieran Powell going run out for 83 and Devon Thomas getting 84. Cariah took three for 33.

Over at the Queen’s Park Oval, Barbados Pride, following on, reached 44 without loss at stumps, this after they were dismissed for 266 in their first innings replying to 490 for seven declared by the Guyana Harpy Eagles.

Shai Hope stood tall with the bat, scoring a fine 119 with wicketkeeper Shane Dowrich getting 44.