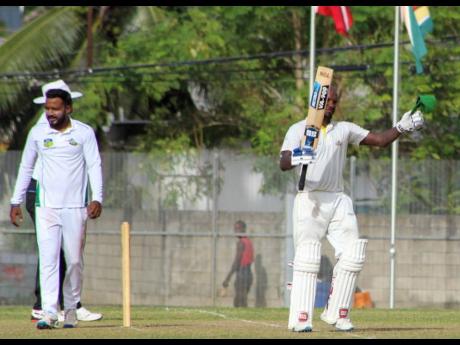 Contributed by Brandon Corlette
Jamaica Scorpions batsman Jermaine Blackwood raises his bat after scoring a century against the Guyana Harpy Eagles on day one of their West Indies Championship contest at the Diego Martin Sports Complex in Trinidad on Wednesday.

A well-organised century from batsman Jermaine Blackwood highlighted the opening day of the fourth round West Indies Championship clash between the Jamaica Scorpions and the Guyana Harpy Eagles at the Diego Martin Sports Complex in Trinidad.

When play ended with the Scorpions on 282 for six, Blackwood was still carrying his bat on 110 from 251 deliveries. The right hander has hit 14 fours and a six. Wicket-keeper Aldane Thomas is the other not-out batsman on 35 with eight fours.

Left hander Alwyn Williams was also among the runs, scoring 51 before he became the second wicket for Godakesh Motie. Off-spinner Kevin Sinclair has also picked up two wickets.

Over at the Queens Park Oval, the Leeward Islands Hurricanes, thanks to a century from number-10 batsman Colin Archibald, closed day one on 301 for nine. Archibald is not out on 104 and with him is Daniel Doram on 17. Preston McSween has so far taken four wickets for 78 runs.

Over at the Brian Lara Cricket Academy, The Barbados Pride, replying to the Trinidad & Tobago Red Force first innings score of 133, are 87 for two at stumps with Raymon Reifer not out on 32. With him is Jonathan Carter on 19.