Campbell falls short of century as Scorpions falter at tea 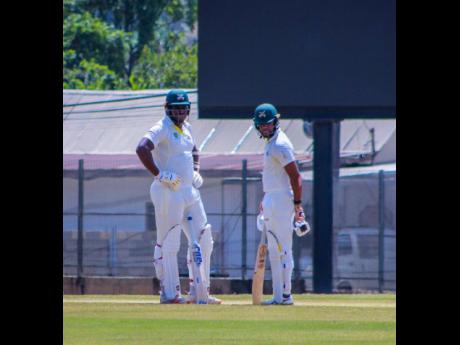 Captain John Campbell fell two runs short of what would have been a deserved century, as the Jamaica Scorpions go to tea at 216 for four, a lead of just 25 runs against the Guyana Harpy Eagles on day four of their West Indies Championship match at the Diego Martin Sport Complex.

Campbell, who resumed after a lunch on 36, went on to add 62 runs before he was trapped in front to a low delivery from Veerasammy Permaul. He had hit 11 fours and a six in his 155-ball knock.

Before that, the Scorpions lost Jermaine Blackwood who added 24 runs to his four after lunch. He went caught at mid-on off Gudakesh Motie. Blackwood and Campbell had shared in a 64-run second wicket stand.

Oraine Williams’ miserable match with the bat continued, as he was trapped in front by Motie for one, to leave the Scorpions in a spot of bother at 175 for three.

When the teams left the field for tea, Paul Palmer was not out on nine and Alwyn Williams, eight, as the Scorpions hold a slender 25-run lead with six wickets in hand.