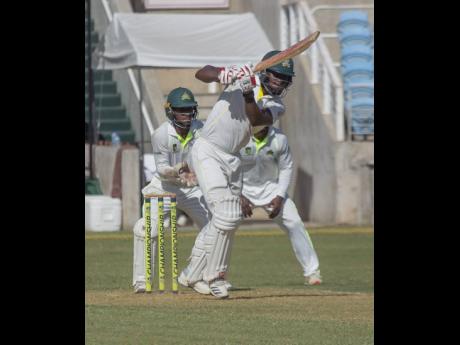 Paul Palmer has, been in a defiant mood, scoring an unbeaten half century as the Jamaica Scorpions have fought back against the Leeward Islands Hurricanes at Tea on day one of their fifth-round West Indies Championship match at the Brian Lara Cricket Academy.

Palmer is not out on 79 and with him is Jamie Merchant, 44, as the Scorpions recovered from 56 for four at lunch to be 195 for six at the second interval.

The pair has, so far, put on 76 runs for the seventh wicket.

Over at the Queens Park Oval, the home side T&T Red Force were 149 for two at Tea with Jeremy Solazano not out on 56 and Jason Mohammed on 55.

Over at the Diego Martin Sports Complex, The Windwards Volcanoes reached 183 for eight. Teddy Bishop getting 44 with Larry Edward not out on 29. Ramon Simmonds, Miguel Cummins and Roston Chase have picked up two wickets each so far.